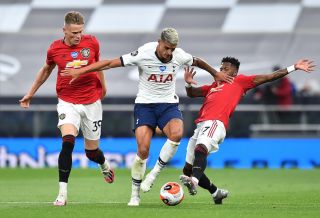 According to The Sun, Fred is set to be offered a new long-term contract to keep him at Manchester United after a stunning turnaround in form.

The Brazilian midfielder struggled to adapt to English football initially, but with the guidance of current manager Ole Gunnar Solskjaer he has become popular among United fans.

Fred serves a purpose in United’s midfield and offers plenty of energy as seen in the Manchester derby win prior to when the Premier League season was brought to a halt amid the COVID-19 outbreak.

The Sun understands Fred is ready to put pen to paper and sign an extension at United, with three years left on his £130,000-a-week deal.

“There was no doubt to Fred’s ability, but he found it difficult in the beginning,” a source told the newspaper.

“He has properly settled now — that includes his young family. He knows he has the full backing of Ole.

“United were happy to hear Fred sees himself here for a long time — things have come full circle.”

A new deal is likely to see a bump-up in wages which is not something any of us would have expected at the beginning of the season.

After a difficult period under José Mourinho which saw Fred regularly overlooked, the Brazil international has found a new lease of life under Solskjaer and has been one of United’s most improved players this season.

He was left out of the starting line-up for last night’s 3-0 win over Sheffield United but he’ll be ready to perform when called upon again.