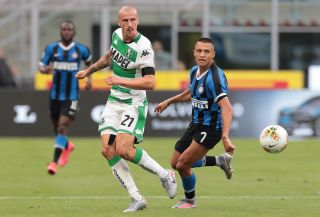 It wasn’t a night to remember for Inter Milan after their six-goal thriller with Sassuolo ended in a 3-3 draw.

It is the second goal we want to focus on because it involves Alexis Sanchez, who is still under contract at Manchester United but hopefully not for much longer.

Sanchez gets into a good position inside the box before putting the ball on a plate for Biraghi to hammer home! We are hopeful is helps persuades the Italians to keep him beyond this season.

Watch the footage below courtesy of Premier Sports:

A strong finish to the half turns things around for Inter! 💪

Lukaku’s penalty and this Biraghi goal have Conte’s team leading 2-1 at the break 🔵⚫ pic.twitter.com/kwJd6AKFyh

But Sassuolo were level when Domenico Berardi scored a penalty, which was given away by former United full-back Ashley Young.

As a result, Inter lost ground on Juventus and Lazio in the race for the Serie A title and are now eight points behind first place.

Read more: Opinion: Nemanja Matic display proves that he is one of United&#8217;s most important players