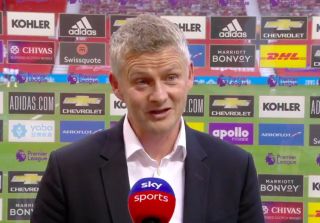 Ole Gunnar Solskjaer was delighted with the efforts of three Manchester United players after the Reds cruised to a 3-0 victory over Sheffield United at Old Trafford.

Anthony Martial scored United’s first league hat-trick in over seven years on a comfortable evening for Solskjaer’s side.

The Frenchman took all three of his goals excellently, his third a nonchalant chip over Blades ‘keeper Simon Moore.

Solskjaer was pleased that the work being done on the training ground is being replicated by the ruthless forward.

But Martial’s performance was not the only positive in a game where Reds flourished all over the pitch.

Paul Pogba, who was making his first start since September 30, offered the dangerous creative threat that he brought in his cameo against Tottenham on Friday.

Pogba was perhaps unlucky not to get an assist after setting up a number of chances for United’s forwards, with Marcus Rashford uncharacteristically wasteful in front of goal.

Solskjaer described the performance of Pogba ‘quality’, and also credited right-back Aaron Wan-Bissaka for his assist for Martial’s second goal.

🗣"He was quality out there"