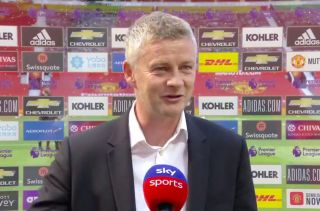 The Manchester United squad have arrived at Old Trafford ahead of their long-awaited return to their stomping ground since their resounding 2-0 win against rivals Manchester City back in March.

Ahead of kick-off which is scheduled for a little under an hour, manager Ole Gunnar Solskjaer spoke to Sky Sports.

The United line-up has recently been released with the most notable addition being the inclusion of world-class midfielder Paul Pogba.

Pogba is one of three changes to the side that were held to a 1-1 draw by Tottenham on Friday evening. Nemanja Matic returns to the starting XI to help provide a platform for Pogba and Fernandes to thrive in midfield.

Mason Greenwood also earns a start ahead of Daniel James after impressing in his cameo against Spurs.

Speaking on Pogba’s first start since December 2019 and if he is excited to see from the Frenchman and his midfield partner, Bruno Fernandes play together, Solskjaer said: “It was always a plan to get him to play more and more, so let’s see how long he lasts today. […] Of course good players playing together is always nice to see.”

Elsewhere, Spanish goalkeeper David De Gea is also set to start amid constant criticism regarding his prolonged dip in form.

Solskjaer reiterated his stance on his number one, “There is always scrutiny whenever you play for Manchester United.” Solskjaer said.

Solskjaer also went onto praise the efforts made by the United ground-staff in order to get Old Trafford ready for his side’s return. “It’s great to be home.” he said. “It is great to see the mosaic out here, too.”

The boss concluded his pre-match interview by noting that the excruciating heat may force him into making some tactical changes as the game progresses.

Solskjaer added: “It is unbelievable [the heat], it’s going to be warm. I think subs may have to come on and make a difference again.”

See the pre-match interview in full below, courtesy of Sky Sports Premier League:

"Every time you play for #MUFC you are being watched by millions of people and any mistake will be magnified." 🕵️

Ole Gunnar Solskjær discusses his team selection ahead of tonight.