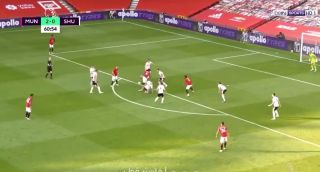 Manchester United have welcomed French midfielder Paul Pogba back into the starting line-up this evening in what is a crucial game in the race for Europe.

United, who currently lead 2-0 against Chris Wilder’s Sheffield United thanks to two well taken goals by Anthony Martial in the first half are pushing on, looking for their third.

That third goal looked nailed on when world-class midfielder Pogba went on a superb run from 35-yards all the way into his opponent’s box.

Pogba danced round three Sheffield United players using quick feet and some silky trickery in the process only to be denied at the very last second by fellow team-mate Martial.

Frustrating for Pogba who looked set to score one of the goals of the season but the attacking quality the 27-year old possesses cannot be denied.