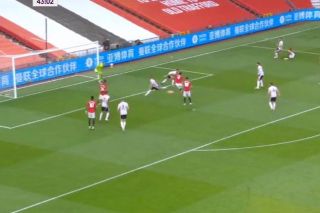 Anthony Martial has doubled Manchester United’s lead against Sheffield United on their return to Old Trafford.

The Reds have been exhilarating going forward, and deserve their two-goal lead against Chris Wilder’s side.

United’s second came after some sustained period of pressure when the ball eventually fell to Aaron Wan-Bissaka out wide.

Wan-Bissaka picked out the ruthless Martial with a pin-point cross which the Frenchman converted past Simon Moore with ease.

Martial has now eclipsed his previous best goalscoring tally in the league for the Reds as he netted his 13th of the season.

He gave United the lead in the opening exchanges, diverting Marcus Rashford’s fierce pull-back into the bottom corner.

See the second goal below, courtesy of RMC Sport: