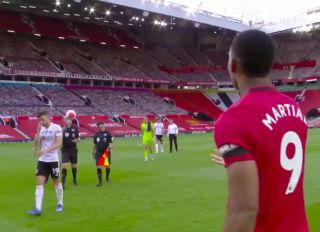 Anthony Martial almost forget to collect the obligatory match-ball as a prize for his three clinical finishes against Sheffield United this evening.

Martial was ruthless in front of goal, scoring at almost every opportunity with a combination of well timed strikes and a nonchalant dink over the Blades goalkeeper.

And his glorious chip to round off a fine performance completed United’s first hat-trick in a league game for over seven years.

Robin Van Persie was the last player to score three in 2013 on a special night at Old Trafford as United secured their last title under Sir Alex Ferguson.

But we hope the achievement can become a much more regular occurrence from now on, with United’s attack looking extremely dangerous with the introduction of Bruno Fernandes and Paul Pogba.

Martial was close to forgetting to collect his match-ball from referee Anthony Taylor, and seemingly had to be reminded by someone before approaching him.

See the video below, courtesy of Sky Sports: