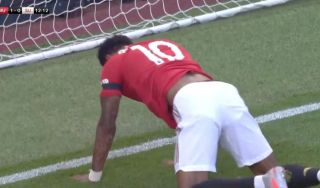 Manchester United forward Marcus Rashford has somehow managed to miss an open-goal after a blistering counter-attack against Sheffield United.

Already leading 1-0 after an opener from Anthony Martial, United looked certain to extend their lead through Rashford.

The Reds carved the Blades wide open in a move which saw Martial played in on goal, opting to lay it off at the very last second for team-mate Rashford, it seemed harder to miss than it did to double the lead.

All the young forward had to do was make a decent connection with the ball and it would have been 2-0, the attacker somehow managed to get his feet muddled up and the ball eventually rolled wide of the mark.

Watch the footage below, courtesy of Sky Sports:

How has he missed that?#MUFC break in devastating fashion but Rashford somehow misses an open goal under pressure from Robinson!

Gary Neville couldn’t believe what he was seeing and said on commentary: “How has he missed that?”

United should have a 3-4 goal lead at Old Trafford and have more work to do if we’re to claim three points.