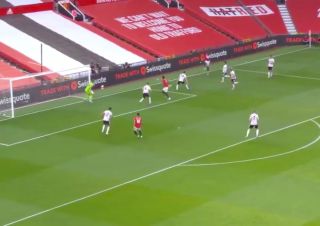 Manchester United have made the perfect start on their Old Trafford return against Sheffield United.

The Blades dominated possession in the very early stages, but have fallen behind after Anthony Martial grabbed his 17th goal of the season.

United’s talisman Marcus Rashford capitalised on some uncertain Sheffield United defending in the box and fired a ferocious delivery into a dangerous area across goal.

Martial did brilliantly to adjust his left foot to side foot home past the helpless Simon Moore, who is in place of Dean Henderson with the United loanee unable to play this evening due to the terms in his loan deal.

Martial gets #MUFC off to a flyer after some good work from Rashford down the right.