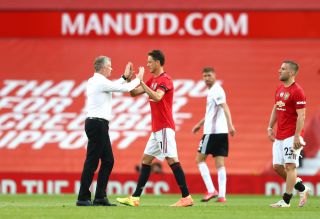 Manchester United cruised to a 3-0 victory over Sheffield United at Old Trafford to keep their hopes of a top-four finish alive.

Anthony Martial will deservedly take all the headlines for his wonderful hat-trick, consisting of two clinical finishes and a glorious dink to put the Reds out of sight.

The Frenchman has become the first United player to score a hat-trick in the Premier League since Robin Van Persie when Sir Alex Ferguson was in charge.

But one player who perhaps won’t get the plaudits he deserves for an outstanding performance is Nemanja Matic.

The Serbian midfielder returned to the starting XI this evening after missing out against Spurs, and offered the perfect platform for United’s most dangerous attacking outlets to shine.

Matic’s discipline at the back allowed his parter in the double midfield pivot Paul Pogba the freedom to thrive in more advanced positions and link-up exceptionally with Bruno Fernandes.

The stats show that Matic was almost flawless throughout, conceding fouls and recovering the ball eight times.

His passing was exemplary; simple yet so effective. Overall, the midfielder completed 93 of an attempted 98 passes in the game.

He will surely play a crucial role in the remaining seven league games of the season.

See his stats below, courtesy of Statman Dave: