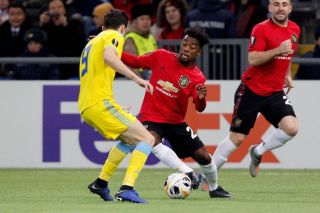 Manchester United boss Ole Gunnar Solskjaer has admitted that he does not know whether or not midfielder Angel Gomes will extend his contract at Old Trafford.

The youngster’s future has hung in the balance for the best part of a year, with links to Chelsea in recent months.

But Gomes is out of contract on June 30 and could leave the club on a free transfer.

However, it is thought that the coronavirus pandemic will see a major shift in contract dealings and negotiations.

As part of Project Restart, Premier League clubs voted to temporarily extend the contracts of players who are out-of-contract on June 30 until the end of the season, but it’s not as if Gomes has been part of Solskjaer’s plans this season.

He’s still only 19 but maybe from watching both Mason Greenwood and Brandon Williams, seeing the impression they’ve been making in the first-team, Gomes feels left behind or under-appreciated.

The deadline to extend players’ contracts until the end of the season is today — June 23 — and United apparently are none the wiser on Gomes’ situation.

Ahead of the Premier League clash against Sheffield United, Solskjaer said (as quoted by Manchester Evening News reporter Samuel Luckhurst): “For me, I’ve not spoken to anyone last night or this morning, so the paperwork and the admin, the meetings that are going on, I can’t update on that.”

Solskjaer on Angel Gomes: 'For me, I've not spoken to anyone last night or this morning, so the paperwork and the admin, the meetings that are going on, I can't update on that.' #mufc

There’s something not quite right about this and I’m starting to feel pessimistic about Gomes staying at United. It really shouldn’t take this long to come to an agreement to stay with the biggest club in the world.

Scroll down to find some of the reactions we spotted on Twitter.

Just let him go… Players like that always hurts the team. See Pogba although good when committed he doesn’t have the passion for the team like James and McTominay shows

Ridiculous. He should see the amount of opportunities players like Williams and Greenwood have got in the past 12 months and jump at the opportunity to sign a new deal

Let him go and wish him the best

This guy should leave if he wants to or better still sign a deal, he isn’t the next Ronaldo or Rooney. If he can’t sign then he should go where he feels would be better for him.

He’s really not worth the hassle.