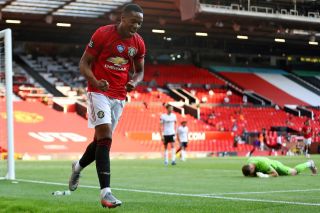 Manchester United were back in action tonight in their highly-anticipated return to Old Trafford in a pivotal clash in the race to secure European football against Chris Wilder’s Sheffield United.

Old Trafford played host for the first time since the Manchester Derby all the way back in March. The club fantastically showcased a giant stadium mosaic with pictures of 40,000 fans from all across the globe.

The Theatre of Dreams really was a pre-match picture of beauty set upon a back-drop of early evening Mancunian blistering sunshine. Game on.

The Reds lined-up with arguably their strongest starting eleven which included the long-awaited starting partnership between midfielders Paul Pogba and Bruno Fernandes.

Elsewhere, the exciting Mason Greenwood came in on the right-wing in place of Daniel James.

United’s line-up suggested the Reds were looking to start the game quickly with Solskjaer opting against leaving his most influential players on the bench.

The exciting looking United side started the game exactly as was hoped with Greenwood coming close to opening the scoring after just four-minutes. His left-footed shot was blocked at the edge of the six-yard box after a teasing dribble which saw him cut outside then back inside again.

However, just three-minutes later the deadlock was broken after United won a throw in deep into the Blades’ half.

Quick-thinking Aaron Wan-Bissaka dispatched the throw-in which allowed inter-changing winger Marcus Rashford to snap-up the ball before drilling it low in front of goal which saw Anthony Martial pounce. 1-0 United.

As the game progressed through the opening stages of the first-half, United’s attacking intent and desire to control the game became apparent. Pogba and fellow midfielder Fernandes began linking up seamlessly with Pogba providing creativity from deep and Fernandes utilising his commanding partner’s positional stability to roam more freely.

Just shy of the 15-minute mark United had the clearest of opportunities to double their lead with a free-flowing, devastating counter-attacking move which saw Martial break the Sheffield United back line with ease. One on one with stand-in goalkeeper Simon Moore, the United front-man opted to lay the ball square to the on-rushing Rashford. The stage was set for the young wide-man to score his first goal since the league’s resumption. However, he somehow managed to get the ball caught beneath his feet and watched it trickle agonisingly wide.

United looked set to go into the break 1-0 up after a thoroughly dominate first half display.  However, at the 44th minute mark, leading man Martial stamped his authority on the game once again.

Right-back Wan-Bissaka continued to contribute in the Blades half of the pitch as he played another key part in United’s second goal. Finding space in behind Wilder’s generic attacking wing-backs, Wan-Bissaka was able to whip in a deliciously inviting ball into Sheffield United’s area which prompted the ever-cooly composed Martial to slot it home. 2-0

As referee Anthony Taylor blew for half-time fans were quick to express their excitement in light of Martial’s fine first-half display  as well as noting that a long-standing unwanted record could be broken during the second-half. Should Martial comeback after the break and grab a third he would become the first player post-Fergie era to net a hat-trick.

As highlighted by leading statistic account Statman Dave, Martial had one his best 45-minutes in a United shirt.

Anthony Martial’s first half vs. Sheffield United by numbers:

As the second-half got underway, the theme of the game very much continued in United’s favour, with the Reds continuing to threaten the normally resolute Blades.

The United squad looked better their opponents in almost every area; they were quicker, sharper and slicker in every department across all areas on the pitch. Full-backs Wan-Bissaka and Luke Shaw were given constant license to add to attacking moves which provided much-needed width, an addition which had already proved decisive twice in the match.

Aside from the two first-half goals, the highlight of the match came from a moment of sheer brilliance by Pogba. Continuing his resurgent form since his long-term injury, the French World-Cup winner produced one of the moments of the season.

Arguably the most well-rounded central midfielder in the world, Pogba showcased every attribute required to demand such an accolade in one-single move.

The Frenchman picked the ball up on the edge of the box and decided to take a run at goal, using his quick feet and some audacious trickery the midfielder weaved and manoeuvred his way past five Sheffield United players. Unfortunately, he was unable to finish his solo effort off with a shot on goal as the ball was agonisingly taken off his boot by team-mate Martial.

Perhaps too keen to net his hat-trick, Martial soon realised he wouldn’t have to wait much longer for the match ball.

At the turn of the 74th-minute the Frenchman bagged his well-deserved third after latching onto a well-played ball by Rashford and dispatching in standard Martial fashion; a delightful chip over the Sheffield United keeper made to look far easier than it actually is. 3-0. Hattrick hero. Game over.

Five-minutes later, Solskjaer decided he had seen enough and opted to make all five allowed substitutes in one-go.

United continued the final 10-minutes the way the other 80 had gone. The side remained in constant control of the game, dictating the tempo from start to finish as well as failing to tire.

One player who may not grab the sporting headlines yet endured an utterly faultless performance was Serbian holding-man Nemanja Matic. The midfield anchor-man rewarded Solskjaer’s confidence in him by delivering a well-rounded and solid display; start to finish.

Once again, as confirmed by Statman Dave, Matic’s influence on the game was not hard to see.

Overall, very positive performance from the Reds, much improved attacking tempo with a constant desire to get the ball forward as quickly as possible in an attempt to see off the opponent as soon as possible.

Thoroughly commanding in midfield with a genuinely stable balance in a formation which saw just one-pivoted holding-midfielder as opposed to two.

Centre-back pairing Harry Maguire and Victor Lindelof were given very little throughout the game however, when called upon acted accordingly to see off any potential threat on David De Gea’s goal.

United will now be looking ahead to their next game on Saturday June 27 where they will face-off against struggling Norwich in a FA Cup Quarter Final tie.