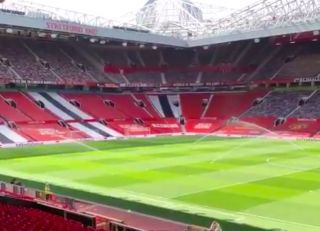 Manchester United have done a fantastic job of creating a spectacle inside Old Trafford ahead of the behind-closed-doors fixture against Sheffield United.

The Reds are just minutes away from kick-off against Chris Wilder’s men, who have a point to prove after a humbling 3-0 defeat to Newcastle at St James Park.

Ole Gunnar Solskjaer has named three changes to the side that drew 1-1 against Tottenham on Friday, with Paul Pogba, Nemanja Matic and Mason Greenwood all included in the starting XI.

And the fact that the club is playing a league match without its wonderful home supporters marks an unprecedented moment in the club’s 142 year history.

However, what United have done to fill the 75,000 seats around the ground has been mightily impressive.

One stand includes the famous Sir Matt Busby quote ‘Football is nothing without the fans’.

There are also faces of over 40,000 United fans in a large mosaic created with help from supporters submitting photos of themselves via the club’s app.

See the stage set below, courtesy of those luckily enough to have access to the ground this evening:

Over 40,000 Manchester United fans will have their faces inside Old Trafford tonight for their clash with Sheffield Unitedpic.twitter.com/DeR0naKbkT

An empty Old Trafford will have a famous quote by Sir Matt Busby in the stands this afternoon which reads “Football is nothing without fans” pic.twitter.com/7wL7xZNeKV

Got to credit the Man U fans, plenty already in the stadium 😂@SufcLive #twitterblades #sufc pic.twitter.com/nTNbVrFozY 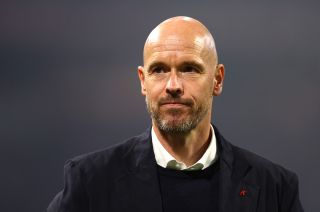