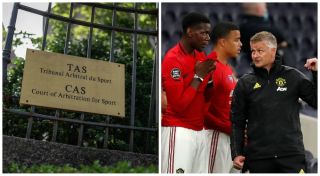 On 10 June, AP sportswriter Graham Dunbar reported that the Court for Arbitration of Sport expects to issue a ruling by mid-July on Manchester City’s appeal of their European ban for violating UEFA’s Financial Fair Play regulations.

UEFA’s original verdict in the case cast doubt over the Premier League season well before COVID-19 elected to pile on. City’s oil-rich owners invested billions in the club after purchasing it in 2008, signing superstars, refurbishing the Manchester City Stadium, rebuilding the youth system from the ground up, in general living up to the moniker of noisy neighbours in unprecedented fashion. Their ambition was naked and simple: become the world’s best club. All paths to that goal intersect at the Champions League winner’s podium. Forget the money, though. Pride dictated the Citizens could not allow the decision from European football’s governing body to stand. There was no question they would appeal.

That inevitable choice sent ripples like a giant skipping stones across a pond. Every other English club with Champions League dreams was forced to play out the 2019/20 season under mysterious circumstances. Would they need to finish fourth to compete in the 2020/21 tournament or would fifth be sufficient to punch their ticket?

With the campaign now resumed, Manchester United occupy the driver’s seat among those on the outside looking in. Yet, while in fifth, the Reds cannot assume the CAS will uphold City’s ban. The Court regularly overturns or mitigates similar judgments. Further, UEFA’s decision not to exile Olympique Marseilles for their FFP violations might be viewed by the judges as an inconsistency. Why does the confederation treat one club more harshly than another?

To be assured Champions League football next term and to avoid the multi-million-pound penalty due to be paid to sponsors for missing the event two years running, the Red Devils must assume no choice exists but to make up ground on Chelsea or Leicester City.

It’s a tall task to overtake either. Following United’s one-goal draw with Tottenham on Friday and Chelsea’s 2-1 victory away to Aston Villa on Sunday, Ole Gunnar Solskjaer’s side fell five points behind the Blues and eight adrift of the Foxes.

Which isn’t to say the feat is beyond the club’s reach. Tuesday evening’s result at the King Power Stadium raised the bar slightly as Brendan Rodgers’ side scratched out a goalless draw with Brighton. United’s gap with the East Midlands outfit bumped up to nine although they now hold a game in hand. But, until the season’s final match, Ole’s crew faces no teams above them in the table. Conversely, Chelsea must deal with City and Liverpool then, to complete the campaign, cope with Wolves.

To be fair, the Blues can hope to meet an experimental Reds squad. With the title already in the bag and a 19th league trophy on display when Frank Lampard’s squad journey to Anfield, Liverpool boss Jurgen Klopp almost certainly will be giving his youngsters and bench players opportunities to prove themselves. Yet, the rivalry is so strong, the Merseysiders’ bench so deep and Chelsea’s defense so suspect, three points should remain far from certain.

When examining United and Chelsea’s strength of schedule during the run-in, we have it comparatively easy. Through 30 matches, the Blues’ remaining antagonists combine for 65 more points than the Reds’. Over an eight-game stretch, they combine to average 8.2 points more than United’s foes. Remember, Solskjaer’s side need only make up five points assuming they retain their slim advantage [1] in goal difference.

Meanwhile, for two reasons, Leicester’s nine-point edge isn’t necessarily the gaping chasm it appears. First, there is that game in hand. If the Red Devils take care of business against Sheffield United this evening, the gap shrinks to a more manageable six points. Second, the season concludes with a tilt at the King Power. If United can make up a further four points in the six matches between Sheffield and Leicester, and the Foxes’ decidedly superior goal difference mandates Bruno Fernandes and co must surpass rather than merely match Jamie Vardy and the gang, then three points on Decision Day could vault the Reds as high as third.

Old Trafford denizens must be concerned with their club’s woeful record against inferior sides. However, the squad is as healthy as they’ve been all season. In addition, a United XI is eminently more dangerous with both Bruno and Paul Pogba in the lineup, feeding some combination of Marcus Rashford, Anthony Martial, Mason Greenwood and Odion Ighalo.

There is no denying Manchester United need help. If the CAS provides it, the task is much simpler. In that happy event, the mantra becomes keep the likes of Wolves and Sheffield United at bay, with no further need to look up the table. But, should the Court rule in City’s favour [the bastards], Manchester’s red half can take heart in the knowledge that both Chelsea and Leicester are more likely to drop points given the strength of their remaining opposition.