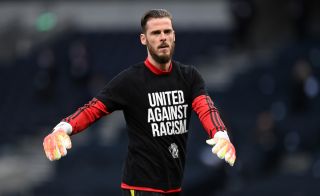 Twenty-four hours before Sheffield United could take the pitch at Old Trafford without Dean Henderson, ESPN FC Mark Ogden was reporting Manchester United had given David de Gea 12 months to return to top form. Ogden understood that, should the Spaniard do so, he’d be in the “driver’s seat” in the race to be United’s No.1 for the foreseeable future. It’s a shame Premier League rules prevent a professional on loan from competing against his parent club. Were the 23-year-old Cumbrian eligible, Red Devils’ fans could see the two keepers on the same pitch and judge for themselves between the pair.

As it stands, Ole Gunnar Solskjaer apparently rates the 29-year-old Spaniard well ahead of the young academy product who spent the past three seasons toiling in the footballing wilderness.

“It’s a different job to be playing for Sheffield United and for Manchester United. The two years [Henderson] has had [at Sheffield United] have been fantastic development. He’s learning all the time, he’s a passionate keeper, developing with good coaching. One day he’ll be England No. 1 and United No. 1 and he needs to keep developing.” GOAL(Quotes via )

First, Henderson’s timetable for becoming the Three Lions first-choice is irrelevant to the conversation. How much stick did former Chelsea boss Maurizio Sarri take for failing to give Callum Hudson-Odoi a Premier League start before his full England debut? Solskjaer’s only concern is whether his youngster can handle the responsibility between the sticks at Old Trafford, not Wembley. Well that and whether the manager has the balls to give him an opportunity.

Second, what is the real difference between being the keeper at Bramall Lane rather than in Manchester?

I promise you it’s not all that tradition we like to throw in rivals’ faces. Twenty league titles, three European Cups and a boatload of domestic cups, I know the club line. But United haven’t topped the division or been a contender in Europe’s premier competition since Sir Alex Ferguson retired.

Yes, they won the Europa League in 2017 under Jose Mourinho and are in with a shout to do so again this term with Solskjaer at the helm. But when one doesn’t rate the Blades in comparison to the Reds, how can one try to sneak the continent’s red-headed stepchild of a tournament into the conversation, especially when De Gea rides the bench on Thursday evenings? He only started three matches during the 2016/17 run, all in the group stage. Mourinho trusted the man who did the heavy lifting, Sergio Romero, against Ajax in the final. In truth, the Europa League proves the club can win trophies without their beloved Madrileno.

The primary question in football remains what have you done for me lately? Not a lot is the answer when it comes to Manchester United with David de Gea as the last line of defence. When you have dynamite in a bottle, why waste any time on a star whose reputation is fizzing out?

How should that be applied to the two keepers? Consider that United score half again as many goals as their eponymous rivals [45:30]. The data suggests it’s easier, not more onerous, to command the box in front of the Stretford End. Yet, the four-time Sir Matt Busby Player of the Year and three-time United Players’ POTY struggles.

The duo’s personal numbers are brutally honest too. In Manchester, De Gea enjoys more margin for error and, for the past two seasons, he’s required it. In contrast, Henderson can’t step awry in Sheffield and doesn’t. Football Reference reveals he surrenders 0.86 goals per 90, second-best in the league this term, compared to De Gea’s 1.03, only good enough for sixth. The Premier League website tells us on the down-low that De Gea has made three errors leading to goals, joint-second-worst in the division [sorry, Martin Dubravka] whereas Henderson has made just the one. We know that De Gea can play at an elite level. We’re also painfully aware he can crack under pressure. To date, Henderson’s game shows virtually no stress.

With two immensely talented keepers on the books, United is in a position to sell. They’ll make far more profit by letting the Spaniard go and, should they keep him, will require a successor much sooner than if they install Henderson as the No.1 for 2020/21. From a cost-effective standpoint, the younger man offers more value even if De Gea suddenly rediscovers his best form.

The only thing Dean Henderson hasn’t done is play for United’s first team. If we’re being honest, all that holds him back is management’s reluctance to take a chance. It’s a shame, because if I asked you to sum up Sir Alex Ferguson’s title-winning sides in a single word, I’m betting it would be fearless.