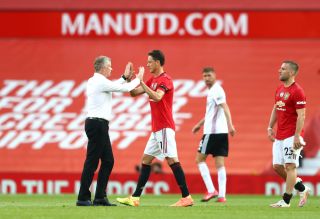 Manchester United strolled to a 3-0 win over Sheffield United on Wednesday, courtesy of a dazzling Anthony Martial hat-trick. Ole Gunnar Solskjaer’s setup created a flurry of chances for the forwards that could have seen United score more, and this was in no small part due to the brilliant partnership of Paul Pogba and Bruno Fernandes starting together for the first time in an empty Old Trafford stadium.

However, while United’s attacking brilliance will earn all the plaudits, the Red Devils were equally solid defensively, with David de Gea earning his first clean sheet of the Premier League restart. Everyone played reasonably well in United’s back four, but neither them nor De Gea faced any significant tests from Sheffield’s attack.

Ultimately, the ease with which United dealt with Sheffield’s attacking threat can be attributed to a fantastic defence-screening display from Nemanja Matic, whose effectiveness cannot be understated.

The midfielder, who won the Premier League twice during his time at Chelsea, brings a level of experience, composure, and pragmatism to United’s midfield that allows Pogba and the full-backs to advance forward without worry. Matic was extremely effective against Sheffield United, completing a remarkable 96% of his 98 passes and only being dispossessed once the entire match (via WhoScored).

In the 21 matches that Nemanja Matic has started this season, Manchester United kept a remarkable 14 clean sheets and conceded just 11 goals. In comparison, without Matic starting, United have conceded 28 goals in 28 matches, keeping just 7 clean sheets (via Transfermarkt).

It is no coincidence that United seem to record clean sheets with Matic in the side. While the defensive midfielder is past his best, he is the only player of this ilk currently at the club.

Scott McTominay and Fred are arguably more talented players individually, but neither play the anchoring role required to bring the best out of Pogba and Fernandes. Despite having aggression and tenacity on their side, they lack the patience, passing range, and initial positioning that can shut teams down, all attributes which made Matic one of the best holding midfielders on the planet during his prime years.

The problem with Matic that has prevented him from being one of United’s best players this season is that he simply does not have the stamina to compete at the top level for years at a time anymore. While the likes of Pogba, Fred and Fernandes can carry him against certain sides due to their exceptional mobility, the top sides in Europe can overpower Matic at their best and nullify United’s entire system.

The 31-year-old has also shown that he cannot play consistent matches throughout a season. His current freshness is in no small part due to missing most of the first half of the season, as well as the last three months.

Matic often appears a peripheral figure in the current squad of future United greats, but it is no coincidence that the Red Devils have gone 13 matches unbeaten with him at full fitness and form. It is integral that United rotate McTominay and Fred in to keep everyone fit and firing, which could be crucial in the battle for Champions League football.

Each team currently above United in the Premier League table has a defensive midfielder at the club that is fundamentally important to their success. If United are to challenge at the top level, they must sign their equivalent player, not only to enable as many clean sheets as possible, but also to bring the best out of Matic over the course of a season.

In the long term, securing the correct defensive midfielder in the transfer window could be the difference between challenging on all fronts and fighting for Champions League qualification at Old Trafford over the next few seasons. For now, Solskjaer needs to carefully determine matches in which Matic should play and those in which he can afford to be rested.

The marquee talent of Rashford, Martial, Pogba and Fernandes can steal the spotlight every week, but they will only fully be enabled by the presence of Matic in the side. Today Matic proved that he is and will remain one of the most important players in United’s quest for Champions League football next season.