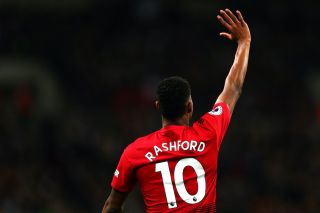 Manchester United star-man Marcus Rashford has taken to social media to send United fans a classy message ahead of the crucial clash against Sheffield United later this afternoon.

Rashford, who is set to start for the second time in six days will be looking to boost his side’s top-four chances by beating the notoriously solid Blades.

United go into tonight’s game in fifth place in the Premier League, five points off fourth-placed side Chelsea, although the Reds do have a game-in-hand.

Undoubtedly the United faithful will settle for nothing less than all three points this evening and star-forward Rashford has sent a personal message clarifying his side’s desire to deliver.

Marcus Rashford sends a message to the #MUFC fans ahead of tonight’s game.