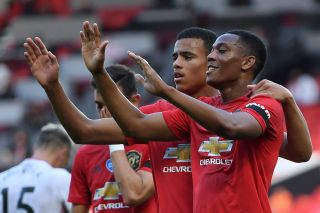 Manchester United fans have taken to Twitter to react to Anthony Martial’s superb first-half display against Sheffield United and have been quick to identify potential curse could be broken.

The 24-year old Frenchman has netted twice in the first 45-minutes, leaving him well on his way to bag a well deserved second-half hat-trick; something which no United player has done since the days of Sir Alex Ferguson.

The United faithful are clearly impressed with the Frenchman’s fine display suggesting that Martial could soon be about to top the 20-goal-season mark.

The fast-approaching goal-landmark would certainly do his case to be United’s permanent number nine no harm and fans have been quick to show their appreciation.

Anthony Martial 😍😍
My ovaries are twerking 😭

Tony Martial, he came from France, English press said he had no chance, 50 million down the drain, Tony Martial scores again…

I love you Martial

Phwar, Martial at his ruthless best. Both goals not easy chances, but he made them look so. #MUFC #MUNSHU