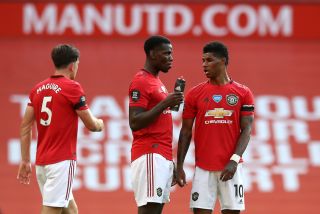 Manchester United moved back to within two points of fourth-placed Chelsea and dealt a major blow to a direct Champions League chasing rival with a comfortable win over the Blades at Old Trafford.

In our first ever behind closed doors match at the Theatres of Dreams, the Reds extended our unbeaten run to a thirteenth game with a route victory over Chris Wilder’s wilting and toothless visitors through a devastating hat-trick from Anthony Martial.

In truth, this could have ended 4 or 5 nil but in the end it was three and easy for a United side on a hot-streak at the moment. This side is growing.

Here we run the rule over those in Red on a night when United barely broke sweat despite the sweltering conditions in M16.

Been in the spotlight since Friday’s blunder, so Dave will be relieved that the tie passed without incident. Rendered a virtual spectator throughout, De Gea had nothing to do as the visitors failed to muster a shot on target. One of the easiest outings of his career, the only thing we saw from him was when he barked out orders to his defence after Sheffield got in behind in the first half.  Kept his concentration levels up on the way to a nice clean sheet. Could have been forgiven for sunbathing.

Had little defending to do but did well going forward. Played his part in the first two goals, winning and taking the quick throw in from which Marcus Rashford teed up Martial to put us ahead. Set up the second, too, with a lovely cross to offer further proof of his improvement in the final third. Looked a threat all night and could have had one himself on an evening when he almost played like an out and out winger.

It’s a slightly above average rating for both of United’s two centre-backs, not because they did anything wrong but more that neither had anything to do. Maguire had a goal disallowed and headed over the bar, but otherwise a disciplined and focused performance from the former Sheffield United man. On a roasting hot Manchester day, the Iceman kept his cool and rendered first Lys Mousset and then his replacement Ollie McBurnie all but anonymous. The pair were barely tested on one of their most comfortable 90 minutes together at the back. Nicely contrasting in styles, there are signs that a very good partnership is blossoming.

Again, had little to do but stuck to his task and kept it simple down the left. Picked up a needless and clumsy booking and linked well with Rashford to good effect at times. Many had picked Brandon Williams to get the nod but Shaw kept his place and I can’t think of anything he did wrong. Solid if unspectacular, Shaw looks noticeably leaner and meaner since the restart. Like his team-mates, most of his best work came in the final third.

Matic had surprisingly been one of United’s best performers as Ole Gunnar Solskjaer’s side gathered momentum before lockdown. Restored to the team after a late cameo at Spurs, he did his job well and kept United ticking over. You’re never going to play at Liverpool pace with this player in the team, but you don’t always need to. His passing was good, he used the ball well and ensured that Maguire and Lindelof were always at ease.  The experienced Serbian ensured the Reds took control of the match and never relinquished it. A good option to have, there are many who thought Matic’s days at Old Trafford were numbered but credit to him – he’s been excellent and looked like he’d never been away. Probably United’s second best player on the night after the hat-trick hero.

We were left salivating at the sight of Pogba and Bruno playing together and United’s much-feted duo dovetailed brilliantly. Pogba’s cameo against Tottenham proved a match saving one, but here he played slightly deeper alongside Matic, in a holding role albeit with licence to go forward. That did not stop him from causing problems, though, as he was heavily involved in the second and third goals and could have scored himself after a stunning piece of skill. Perhaps drifted in and out of the game at times, but he  proved an integral string-pulling heartbeat – there’s no question that we look a much better with him there than without. He feels like a new signing and will be huge for us in the coming weeks. Mesmeric at times, he would have capped a superb passage of play had Rashford capitalised on a defence-splitting chip. There were signs of a potent X-factor pairing.

The generational talent started on the right-hand side of our front four and showed flashes of form. Had two good chances and caught the eye with a couple of nice runs but overall didn’t perhaps get in the game as much as he’d like. Got taken off with ten minutes to go as Solskjaer assessed his options with Juan Mata coming on and getting a run on the right. Not quite a first team regular yet, but this lad’s talent needs no embellishment and it’s easy to forget he’s only 18. Played his part and worked hard.

More metronomic magic from the heart and soul of Manchester United. Simply wonderful. He seemed drawn to the ball like a magnet, always wanted it and always looked to make something happen. True, he gave the ball away a few times but you don’t mind that because he takes risks and tries something different. There was a stunning spin-on-a-sixpence in the second half to set Rashford away and, as ever, he was involved in two of the three goals. Started the move that led to the second goal and was heavily involved in the third – of course he was –  his neat footwork and deft touches teeing up Rashford to play in Martial. Gave me palpitations when he went down clutching his knee before half-time but thankfully emerged unscathed. Never seen one player have such a transformative effect on an entire team.

A strangely erratic night for United’s (now joint) top scorer and all-round philanthropist. Missed a sitter at 1-0 and had another effort he should have scored, yet his quick thinking set up the opener and he also claimed an assist for his colleague’s crowning glory. It’s not just school meals he puts on a plate – he and Martial work superbly in tandem and, at their best, are formidable for even the meanest of opposition defenders. Marcus and Martial now have 28 goals between them in easily their best seasons at United.  This side is growing and Rashford will be a key part of that. Sheffield couldn’t deal with him at times.

Anthony Martial doing Anthony Martial things. Having dropped a 2/10 on Friday at Tottenham, Martial was unplayable here as he notched United’s first league hat-trick for seven years. Reacted quickest after Rashford had smashed a throw-in across goal, then burst into the box to slam home a harder-than-it-looked finish for the second goal shortly before half-time. With the game drifting to a denouement, the mercurial Frenchman applied the coup de grace in a goal of disgustingly good quality. Matic began the move and found Fernandes, he played a one two with Rashford to find Martial in the box for a simply filthy lob over Simon Moore – we even got the rarest of smiles. A stunning team goal but it was a shame there were no fans in the ground to witness it. Tres bien!

United made all five substitutions at once – Andreas Pereira, Juan Mata, Scott McTominay, Dan James and Odion Ighalo – but none of them were on long enough to get a rating. Solskjaer merely shuffled his pack to keep legs fresh and look at his options. The game was already won and it was a surprise to see all changes made.