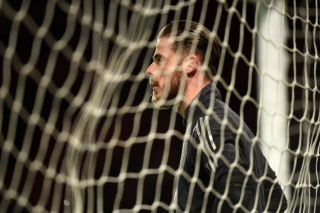 Former Manchester United striker Louis Saha has spoken out on the potential dilemma regarding David de Gea at Old Trafford.

As things stand, De Gea remains United’s No.1 but as he continues to make avoidable errors between the posts, Dean Henderson is proving to be one of the Premier League’s most outstanding goalkeepers whilst on loan at Sheffield United.

De Gea’s most recent error came on Friday night against Tottenham Hotspur as Steven Bergwijn scored the opener in a 1-1 draw. It was a real shocker but United captain Harry Maguire was also at fault in the lead up.

However, it remains to be seen if Henderson is ready to become No. 1 at United and replace De Gea, but Saha has weighed in on the discussion and has issued caution.

“Looking back on the season he’s had three or four of these, so you think ‘hang on a minute’ and you’re wondering if he just switches off because these are big mistakes not just something small which maybe he could’ve done better with… but there are also points earned when he makes tremendous saves so it’s a difficult one.

“You also have Henderson doing really well, who I think has been more challenged in goal, but you don’t judge a goalkeeper for just one year. You don’t know how a keeper may respond to changes in pressure when at a new club, and playing for United is not the same as playing for Sheffield United. He has the talent, that’s not a question, and maybe it’s healthy for De Gea to think about competition.”

Saha had Edwin van der Sar in goal during his time at Manchester United. The calmest keeper I have seen.