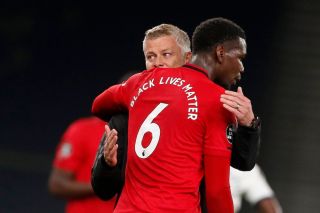 Ole Gunnar Solskjaer has named his starting line-up to face Sheffield United in the Premier League tonight, with the game being held behind closed doors at Old Trafford.

With a star studded midfield and attacking line-up, you’d be hoping Manchester United will have enough to take three points from the Blades, but they also want to keep their dreams of playing in Europe alive.

Chris Wilder’s side have yet to score a goal since the Premier League’s resumption after playing two games.

The biggest headline from the line-up sees Pogba back in the starting XI. It’s the first time the Frenchman has started a game with new signing Fernandes, and hopefully it’s enough to unease a few of the Sheffield United players.

It will be interesting to see how much freedom both Pogba and Fernandes will be given, together in midfield, to express themselves, and it comes as no surprise that Nemanja Matic is the one tasked with being the anchor.

David de Gea was always going to start tonight’s game between the posts. Solskjaer is right to stand by his man and probably believes he can get back to his best between now and the end of the season.

Scroll down to read tweets from United fans reacting to the team news.

OMG WHAT A TEAM

Oh my days what a teeeeeeeaaaaam

OMG WHAT A TEAM 😍😍😍 pic.twitter.com/GlWvpGEQEF