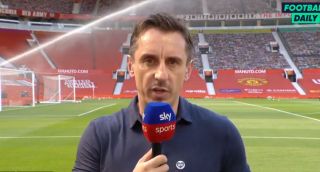 Nemanja Matic has been given the job as midfield anchor and we are excited to see how much freedom that gives Fernandes and Pogba to roam forward. They are two players you want in and around the box and Sheffield United won’t be looking forward to trying to contain them over the course of 90 minutes.

However, Pogba may not be ready to play a full 90 minutes. He came off the bench against Tottenham Hotspur on Friday night and made an instant impact, leaving Ole Gunnar Solskjaer with little choice but to start him against Chris Wilder’s men.

Neville is excited to see them both in action and doesn’t sound too worried about the job Solskjaer needs to do as manager to make it work.

I know the best players should get the best out of one another, but in terms of our system you’d hope the manager has something special planned to give his players an extra edge.

Check out Neville’s pre-match analysis below as he reacts to United’s line-up with Fernandes and Pogba starting.

🗣"With those 2 in midfield now, there shouldn't be any excuses for a lack of creativity" @GNev2 on Paul Pogba & Bruno Fernandes starting together pic.twitter.com/J6lldmSE5j