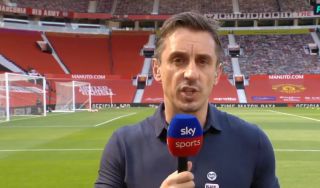 Gary Neville was asked to weigh in on the ongoing David de Gea debate.

The Spaniard hasn’t been at his best this season and with Dean Henderson impressing all season on loan at Sheffield United, it was only a matter of time before questions were asked about the future of our No.1.

Neville doesn’t agree with Ole Gunnar Saying that De Gea is the best goalkeeper in the world. He was, but he has a long way to go before deserving such recognition again.

The former Manchester United full-back did add that Solskjaer is right to defend his man.

On Sky Sports, Neville said: “For three or four years he was a shining light, but since the 2018 World Cup he has had a difficult time.”

🗣"For 3 or 4 years he was and he was a shining light, but since the 2018 World Cup he has had a difficult time" @GNev2 on if David De Gea is the best goalkeeper in the world pic.twitter.com/bop7a5Vr4p

The question for Solskjaer is how does he change De Gea’s mindset and get him back to his best?

If he continues to let in avoidable goals between now and the end of the season, the Norwegian may be forced into making a big call on Henderson, who may not be ready for such a role at United just yet.