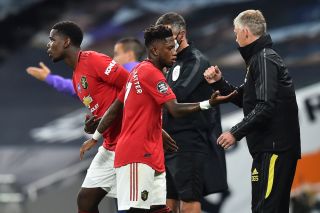 I have noticed Manchester United fans growing more fond of Fred in the weeks leading up to the coronavirus pandemic which resulted in the 2019-20 Premier League season being brought to a halt. Now football has resumed we are hoping the Brazilian midfielder can pick up from where he left off.

Former Manchester United midfielder and fellow Brazilian Kleberson has shed some light on why he thinks Fred has improved so much recently after initially getting off to a slow start at Old Trafford.

In an interview for The Independent, Kleberson explains how Fred’s role has changed under Ole Gunnar Solskjaer, saying: “From my point of view, Fred understood that he had to change his way of playing to succeed at United.

“I don’t know if the idea came from him or Solskjaer but he started to play in a more defensive role in comparison to the further forward position he used to play under Jose Mourinho.

“With that he started to play in a simpler style, got his confidence back, and was able to show the quality he has always had with great passing in the build-up.”

United spent big to sign Fred from Shakhtar Donetsk but it didn’t seem like Jose Mourinho was a fan after buying him. Fred made the move in the summer of 2018 and he was coming into a team that was inconsistent and really struggling.

But ask anyone who watches United closely and they’ll tell you Fred has become an increasingly important part of the side this season. A strong candidate for for Solskjaer’s most improved player this season.