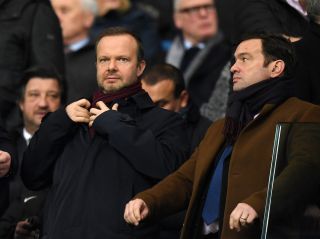 Ed Woodward accurately states that tonight’s game between Manchester United and Sheffield United is cause for ‘mixed’ emotions as Ole Gunnar Solskjaer’s men prepare for their first home match since the Premier League’s return.

The Red Devils host Chris Wilder’s Blades on Wednesday night at Old Trafford. It’s our first home match since the derby win over Manchester City but the biggest difference will be in the stands, empty for the foreseeable future with fans forbidden from attending the remaining fixtures this season due to COVID-19.

We can’t ignore that will have a huge impact on the remaining fixtures.

At least the stands at Old Trafford will feature banners that read ‘“FOOTBALL IS NOTHING WITHOUT FANS” – Sir Matt Busby’ and ‘UNITED AGAINST RACISM’. These will be visible for United’s remaining four home games in the league against Sheffield United, Bournemouth, Southampton and West Ham.

According to the Manchester Evening News, a new banner dedicated to the recently passed Manchester United legend Tony Dunne, who was part of Sir Matt Busby’s 1968 European Cup winning side, will also hang from the second tier of the east-stand.

Moreover, a minute silence will be observed prior to kick-off to pay respect to Dunne.

Ed Woodward has written a message to supporters in the official match day programme: “Emotions are mixed as we welcome Sheffield United to Old Trafford this evening. While everyone at Manchester United is excited to be getting back to playing football, we regret that our fans cannot be in the stadium, and recognise these are difficult times for many people around the world.

“We mourn all those who lost their lives to coronavirus and honour the legions of frontline heroes — from nurses, to supermarket workers, to neighbourhood volunteers — who have helped our communities through this most challenging of periods.

“We have done what we can, through the club and the fantastic Manchester United Foundation, to support those efforts. I’m especially proud of the many staff who volunteered to take part in initiatives such as food bank deliveries, welfare calls to elderly fans, and the provision of over 60,000 meals for NHS staff cooked in our Old Trafford kitchens. I’m also proud of our players and their own individual work that has made a difference during the pandemic.

“”As a club, we say ‘thank you’ tonight through the ‘United for the Heroes’ banner displayed in the Sir Alex Ferguson Stand, as well as the NHS logo on the players’ shirts.
“You will also see powerful anti-racism messages, on the players’ shirts and in the stands, and we are proud to be uniting with our players and the rest of the Premier League behind this crucial cause.

“Diversity, inclusion and the fight against racism are at the core of our values as a club whose support spans racial and cultural boundaries. This has been a long-standing commitment from the club, as part of our All Red All Equal campaign and our support for groups such as Kick It Out.
“The breadth and diversity of our fanbase is demonstrated by over 40,000 supporters from 193 countries who submitted their pictures for the spectacular fan mosaic, which will be on show in the stands for the first time tonight.  We hope the mosaic will provide inspiration to the team as a reminder of the hundreds of millions cheering them on from home.

“As a banner in the Stretford End tonight declares, quoting Sir Matt Busby, ‘football is nothing without fans’, and we can’t wait for you to return to Old Trafford as soon as it is safe to do so. Until then, the players will strive to retain the spirit of that pulsating win against Manchester City when we were last together and the momentum they had created before the enforced break.
“On the pitch, there is no escaping the reality that the coming months are going to be difficult for everyone in football and we are no exception. However, our club’s foundations are solid and, provided we stick together and manage our resources carefully, we will come through this period with our strength intact – thanks in large part to the loyalty of our fantastic supporters.

“Wherever you are watching, enjoy the game tonight.”

Hopefully it won’t be difficult to enjoy the game and United win it convincingly.

No injuries on top of that, or is that too much to ask for?

Read More: Opinion: How badly do Manchester United need the CAS in their corner?