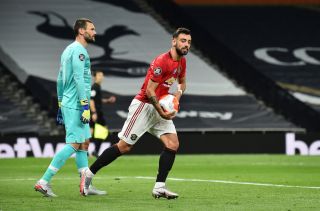 Mark Lawrenson believes Manchester United are “about to kick on” as a team.

The Red Devils returned to action with a 1-1 away draw against Tottenham last week as Bruno Fernandes scored from the spot to equalise late on.

It saw United increase their run of unbeaten games to 12, an impressive record that could eventually see Ole Gunnar Solskjaer’s side overtake Chelsea in fourth. The Blues face Manchester City in the league this week and our fingers are crossed that they drop points.

Bruno Fernandes is another factor behind why United are playing so well since January. He has scored three goals and registered three assists in six Premier League games so far this season.

However, former Liverpool defender Lawrenson feels that the future is bright for Solskjaer’s side.

Writing in his column for BBC Sport, Lawrenson said: “Watching Ole Gunnar Solskjaer’s side in Friday’s draw at Spurs, you could tell they are in a good place at the moment.

“I know David de Gea’s mistake cost them a goal but they have so many quality players, and it feels like they are about to seriously kick on as a team.

“De Gea has not suddenly become a bad goalkeeper, it is just that at the moment he is not the De Gea who was United’s best player for three years.

“I wonder if he has just tweaked his technique a little bit, because what he used to do was brilliant and now what he does is average.”

Lawrenson is tipping a 2-0 win for United, while BBC Sport predicting guest/rapper Aitch, who is a Manchester United fan, went for a 3-0 home win.

As things stand, United are five points behind fourth-placed Chelsea in the Premier League table.