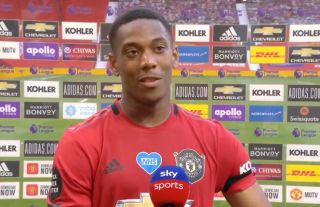 Anthony Martial is having his most prolific season yet for Manchester United just when they need him most.

The France international scored a hat-trick tonight as the Red Devils took three points with a win over Sheffield United. The game, played at Old Trafford without any fans, was a one-sided affair with Man United in control throughout.

Martial had one of his better games for the club, scoring United’s first hat-trick in seven years, and it may have given Ole Gunnar Solskjaer some assurances about his striker ahead of next season.

He has risen to the occasion on a number of occasions this season and certainly looks a better player under Solskjaer than he did when José Mourinho was in charge.

Martial was interviewed on Sky Sports after the match and looked thrilled with his performance (as he should!). This was after he almost forgot to collect the match ball and when he forgot who assisted his three goals!

🗣"If I score more the team will be better"

Anthony Martial on if this is his best ever season for Manchester United pic.twitter.com/EYVs3lw2OO

The 24-year-old is coming of age and believes he can make United a better team by continuing to score goals. It may seem he’s stating the obvious but we think this is Martial taking responsibility.

Good on you, Tony!