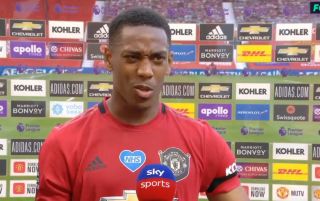 Anthony Martial needed assistance after the match to remember who assisted three of his goals against Sheffield United.

The France international was at his best tonight — scoring Manchester United’s first hat-trick in seven years — and it will give Ole Gunnar Solskjaer plenty of belief as he may think twice about signing a new centre-forward this summer.

United were exceptional, though, with all attacking players causing havoc for the Blades. Although Marcus Rashford wasted some golden opportunities, he can at least be credited for getting into the right positions.

Martial was clearly buzzing in his post-match interview speaking to Sky Sports (via Football Daily), as you can see below:

Anthony Martial on not knowing who assisted his goals pic.twitter.com/QB656u0jfM

When quizzed on his goals it becomes clear that Martial doesn’t remember who assisted each goal. All he knows is how to put it in the back of the net!

However, to clear everything up, Rashford created two goals and Aaron Wan-Bissaka got one assist.

Martial picked his third goal as his favourite from the game.