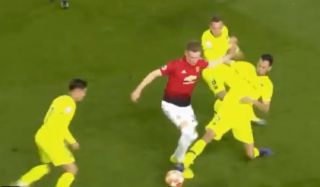 Sky Sports News tweeted the breaking news that Juventus have agreed a £72.5m fee with Barcelona to sign Arthur.

They add in their report that Arthur’s preference is to stay at Barcelona and fight for his place, but this could be an example of a club that simply needs the cash. A lot of football clubs are put under financial stress now amid COVID-19.

Clubs who can afford to sign the likes of Moussa Dembele, who has struggled at Camp Nou, may strike lucky this summer as a result.

Anyhow, a United fan on Twitter saw the opportunity to spoil Juventus’ announcement. Their fans will be excited by the news of a new player potentially arriving this summer, until they see this footage…

On the day Scott McTominay agreed terms with Manchester United to extend his contract until 2025, a video resurfaced with Arthur, Philippe Coutinho and Sergio Busquets all being out-muscled by the Scotland international.

Lovely day for this to be announced as McTominay signed a deal today too. Here’s the pair of them along with £142m Coutinho and Sergio Busquets. pic.twitter.com/HtgCGlitU2

How fitting! A reminder of who is boss.