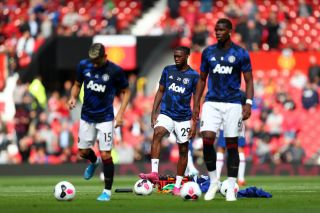 Manchester United are set to return to action tomorrow evening in their second competitive game back since the break where they will face-off against this season’s surprise package Sheffield United.

The Reds will be making their first appearance at Old Trafford since their stunning 2-0 victory over arch-rivals Manchester City on March 8.

United will be looking to continue their top-four challenge having secured just a point against Jose Mourinho’s Tottenham Hotspur last Friday.

Looking ahead to Ole Gunner Solskjaer’s crucial Sheffield United clash, we will assess three key things to feel positive about.

World-class midfielder Paul Pogba returned to action last week after a long-term ankle injury and put in a fine display which reminded his critics just why he is so valuable to the United squad.

The French World Cup winner managed to get half an hour worth of competitive football under his belt in a cameo which helped his side comeback from one nil down to secure a valuable point away to Spurs.

Such was the fine display of Pogba, questions have now been raised as to whether or not Solskjaer can afford not to start with him on the pitch.

With Sheffield United seemingly struggling after the resumption of the league, having failed to score a single a goal, this could be the perfect opportunity for the dominate midfielder to start his first match in six-months.

Space for Aaron Wan-Bissaka to show his attacking ability

Right-back and fan favourite Aaron Wan-Bissaka could have a superb opportunity to showcase his attacking ability when United take-on Sheffield United tomorrow evening.

Tactical set-ups could allow the predominately defensive full-back to prove he’s just as capable going forward as he is backwards. Wan-Bissaka’s lack of contributions at the other end of the pitch have often been a source for rare criticism, something which the young Englishman will be hoping to improve upon ahead of next season.

In addition to left wing-back Steven’s license to get forward, inexperienced centre-back Jack Robinson is likely to sit on the far left of a back three, especially with partner John Egan being sent-off in The Blades’ last outing against Newcastle United.

Having started just two league games this season, Robinson’s lack of first-team football could be an area of weakness for Wilder’s normally solid side.

Tomorrow’s game could see Solskjaer issue Wan-Bissaka with a greater license to get forward and overload their opponents left side in an attempt to take advantage of the space available.

No Henderson between the sticks

Due to loan terms and regulations, highly rated goalkeeper Dean Henderson will be unable to feature for Sheffield United against parent club Manchester United.

Henderson, 23, who is leading the race to win the league’s Golden Glove award with 11 clean sheets will be relegated to the stands to watch his temporary side take-on his permanent one.

Henderson’s ineligibility to feature between the sticks for Sheffield United will undoubtedly give the Reds a boost in their quest to close the gap on current fourth place side Chelsea.