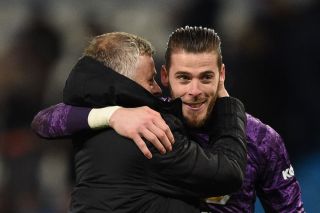 Manchester United boss Ole Gunnar Solskjaer has leapt to the defence of his number one, David de Gea, at his latest press conference.

Solskjaer spoke to the press via Zoom this morning in his latest press conference ahead of the Reds’ league game tomorrow night against Sheffield United.

Addressing the criticism his number one goalkeeper has received in recent times, most notably from Roy Keane, Solskjaer has been quick to reiterate how highly he rates Spanish international De Gea.

As quoted by Manchester Evening News, when asked about his stance on De Gea, Solskjaer said: “David is the best goalkeeper in the world, he’s conceded two goals in the last seven he’s played for us, there are City, Chelsea, Tottenham, Everton, two goals in seven games, we’ve gone on a run and the two goals.

“The Everton one is a freak one, this one he can’t save it, he makes great saves, wins games for us and he’s still the best goalkeeper the world. David is working really hard, he isn’t making errors you see time and time again. He’s working hard in training, I’m pleased with his work.

“He’s been at United nine years now, next year is his 10th season. He’s had some fantastic seasons and I don’t think it’s a bad run if you concede two goals in seven games against the teams we’ve played. He’s made match winning saves, he saved a point for us against Tottenham with the save, mentally a very strong keeper but I speak to him every day, that’s fine.”

Solskjaer and the United squad host Sheffield United tomorrow night in a crucial league tie which could decide which one of the two clubs get European football next season.

With the United boss reaffirming his confidence in the under-fire De Gea, it is likely that he’ll opt against making any changes between the sticks, despite several questions surrounding whether or not he should.

Elsewhere, Solskjaer addressed speculation surrounding goalkeeping prospect Dean Henderson’s future. The Norwegian confirmed that he hopes the club’s administration can successfully negotiate a new deal for Henderson who is currently on loan with Sheffield United.