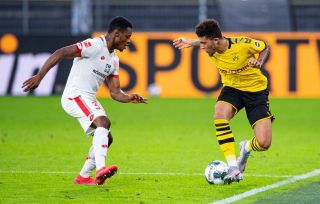 Manchester United are prepared to hold fire on their approach for winger Jadon Sancho due to Borussia Dortmund’s £100m transfer fee being too high.

United have long been linked with the young English attacker, however, interest in Sancho is thought to be growing among Liverpool and Real Madrid.

According to the Daily Mail, United are prepared to wait on the German side to see if their demands will be reduced in the coming weeks.

Sancho, who has 33 goal contributions in just 25 league starts has been identified as a key target for the Reds having endured a highly impressive break-out season in the Bundesliga.

Manager Ole Gunner Solskjaer is keen to add to his side’s attacking options and sees the right flank as a weakness after it was reported by The Sun that current winger Daniel James may be sent out on loan to further his development.

However, with the popular German side demanding a fee as high as £100m for their star-man, United are keen to halt their interest seeing the fee are just too high especially off the back of an unprecedented season which has seen clubs worldwide lose revenue due to the ongoing COVID-19 pandemic.

Elsewhere, it is understood that fellow top-four rivals, Chelsea have offered 31-year old winger Willian to United but is believed not to fit the policy of the United hierarchy which includes young, British players.