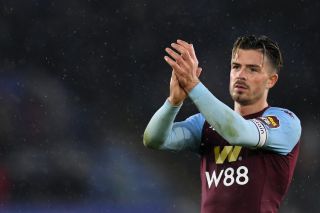 Football agent and Stellar group Chairman Jonathan Barnett has spoken out and addressed the transfer speculation surrounding his client Jack Grealish, ahead of a proposed switch to Manchester United.

Manchester United see Grealish as a top target this summer, as per Manchester Evening News, and will be hoping to secure the creative player for a considerably lower fee should Villa lose their fight against relegation.

Grealish, 24, has 13 goal contributions to his name in 28 league appearances in what has been a stand-out debut season for the highly-rated Englishman.

The Villa captain has been hotly tipped to swap the Midlands for Manchester in a move which could not only enhance his club career, but also aid his claims for ionternational football, something which up until now has eluded the talented playmaker.

The rumours and links between Grealish and United have prompted many questions around when we could see Villa concede defeat in their attempts to retain their most prize-asset.

Speaking on The Ornstein and Chapman Podcast, Barnett has confirmed any discussions relating to Grealish’s future will not take place until this domestic campaign has been completed.

When asked about Manchester United’s reported interest in the 24-year old attacker, Barnett said: “Jack is captain of Aston Villa, his first priority at the moment is to make sure that they survive in the Premiership, until that is sorted out, we don’t have the discussion.