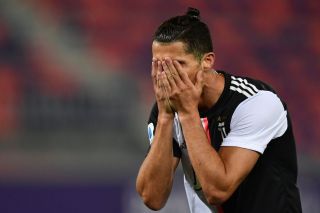 Football is back and even the best players are a bit rusty.

Former Manchester United winger and current Juventus star Cristiano Ronaldo took one of his worst ever free-kicks during a Serie A match against Bologna last night.

The Italian giants played their first league match since the Serie A resumed on Monday, and Ronaldo looked like he didn’t practise his free-kicks during lockdown. That said, the Portugal international hasn’t scored a free-kick at club level since 2017…

He still fancied his chances against Bologna goalkeeper Lukasz Skorupski and we’re unsure if the ball has landed yet.

Good thing the stands are empty tho 💀 pic.twitter.com/2wnf1BFVx6

At least he scored a penalty as Juventus clinched a 2-0 win — after missing one in the Coppa Italia semi-final second leg against AC Milan.

Juve made the final but lost 4-2 on penalties against Napoli, and Ronaldo didn’t get to take a spot kick. No doubt the Italian media had fun with that.