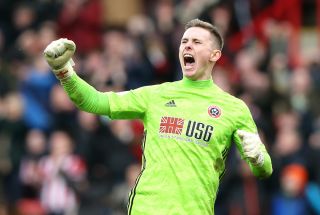 Henderson, 23, has been with The Blades since the summer of 2018 and has been a key contributor to the club’s rise back to England’s top-flight.

The young English keeper has an impressive 11 clean sheets in 29 league starts to his name, a stat which sees him top the league’s Golden Glove chart.

Sheffield United midfielder Oliver Norwood has now spoken out on the impressive keeper’s future and tips him for greatness.

During an interview with Sky Sports, Norwood stated that Henderson was capable of making the step-up, saying: “Definitely, he’s proven himself this season, he’s up there with most clean sheets in the league so he’s obviously doing something right.”

Addressing the increased pressure that Manchester United and England number one brings, Norwood went onto say: “I’ve read a few things from different people and I do agree that there would be a lot more pressure on him going and playing as Manchester United’s No 1 rather than Sheffield United’s – the scrutiny he would be under being England’s No 1 as well.

“I’m sure Hendo can handle that. He’s sure of himself, he’s very confident.

“I’m delighted he’s staying until the end of the season to help us, I have no doubt over the next [eight] games he will pick up some points for us.

“Next season is next season, we are not looking that far ahead.”

According to The Telegraph, the call on Henderson will be made when the final eight games of his campaign are completed, giving De Gea time to prove himself as Solskjaer’s first-choice keeper.

I would not be surprised if #mufc replaced David De Gea this summer with Dean Henderson but only if they found a suitor for the legendary Spaniard.