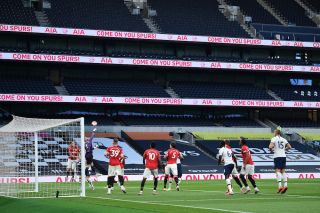 Hello and welcome back to Rowlesy’s Ramblings. Finally, some football to talk about. It’s artificial, sanitised and forcibly brought back for all the wrong reasons, but it’s football all the same.

Pre-game, with pre-lockdown form out of the window, many would have taken a draw at Tottenham, with it being the first game back and rust and cobwebs apparent. Ultimately, it ended in disappointment as United came back strong and probably would have won on another day or if given ten more minutes.

There were clear talking points from the game, so here’s my take on it:

The De Gea v Henderson debate rumbles on, is the guard slowly changing?

I won’t twist the knife on De Gea as brutally as Roy Keane did. I have seen how many times De Gea has saved United down the years and will remain eternally grateful for what he has produced wearing our shirt.

That said, it would be blind naivety if I didn’t accept that his performances have dropped drastically over the last 18-24 months, given the immeasurably high standards he set for himself.

As mentioned previously, Andy Mitten exclusively revealed to me Dean Henderson is a man in a hurry and will not wait forever to get his chance at Old Trafford. It is my understanding that talks are happening behind the scenes for Henderson to extend his deal at United, which expires in 2022.

Henderson has the joint most clean sheets in the Premier League this season, so is more than proving he can handle the biggest stage and the additional scrutiny that comes with donning the United shirt.

Of course, there is no hiding place for keepers as, invariably, their mistakes pay the biggest price and end up with a goal. It is a merciless, occupational hazard that comes with the territory of wearing the gloves, but for De Gea to add another mistake to his unwanted record in the first game back has only stoked the fires some more.

De Gea has been coasting in recent years with Sergio Romero, as admirable as his record is, largely between the sticks against inferior opposition in cup competitions and seldom applying sufficient pressure to take De Gea’s place.

Henderson’s performances at Bramall Lane are a large reason why Sheffield United are virtually rivalling United in the table, you would have got long odds on that transpiring in August.

More importantly though, each clean sheet is perhaps simplifying a potentially difficult dilemma for Solskjaer. It would be crassly foolish to write off De Gea just yet, one of United’s best ever keepers, but he needs to revisit those old heights quickly to silence all the talk.

The problem lies in De Gea is the world’s costliest keeper and would be difficult to shift, should Solskjaer deem his time at United over, with his bumper contract running until 2023.

Difficult keeping situations have been encountered in Premier League history- Shay Given v Joe Hart, Petr Cech v Thibaut Courtois and any changing of the guard comes with a lump in the throat. Generally, those tough calls ended up vindicated.

Dean Henderson’s time at United will come, it is just a question of when.

United fans finally got to witness the appetite whetting proposition of Pogba and Bruno in tandem and the glimpses were absolutely delicious.

United had Spurs on the ropes at times following Pogba’s introduction, and evidenced how United can fit both Pogba and Bruno in the same midfield in a 4-2-3-1 system, with Bruno drifting to the right while Pogba adopted his favoured left side.

Both Pogba and Bruno oozed confidence, with Bruno easily United’s most threatening player before Pogba entered the fray, with both midfielders audaciously pulling off ridiculously exquisite passes to Anthony Martial and Marcus Rashford.

Pogba looked refreshed, hungry and was a driving force, sumptuously leaving Eric Dier with no choice but to bring him down for a penalty.

When you compare the talents of an on-song Pogba to the likes of reported targets Jack Grealish and Donny Van De Beek, and there really is no comparison so the hope is that this is no flash in the pan from Pogba and he can actually be the heart of this new United team.

It is a broken record type question whether Pogba sees his future at United but, regardless, he was a joy to watch and United have a huge chance to take the top four and silverware if he maintains that form and chemistry with Bruno.

Something will eventually have to give with Pogba, but any United fan could appreciate the quality of his cameo on Friday. Let’s see how the next few months play out, hopefully it is full blown commitment to this new United team and not just a flash in the pan.

Football without the fans is nothing:

Given its importance, I deliberately left this as my last point. The notion was imprinted in my head having seen United’s win in Austria and sampling the German football before the Premier League returned but its return was all the confirmation I needed.

Football is nothing without the fans.

They truly are the lifeblood of any club and the artificial noises, fan cams (half empty if you’re city) and lack of sharing the big moments with the players proves that this sanitised, clean version is only serving as a means to very sad ends- the financial implications from sponsors and TV deals and the emotional implications of denying ‘that lot’ their first title in 30 years.

It’s clear those are the resounding pressures surrounding the decision to return. It just doesn’t feel right at all. It is hard to absorb all the action with the same gusto. Lives are still being lost, after all.

Of course, I will still watch, that is borne out of my love for the sport, but this is not the ‘beautiful game’ as we all know it and it sorely misses its most vital ingredient- the hard paying supporter going through the turnstiles.