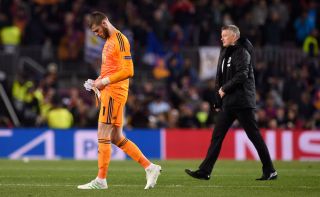 David de Gea has until the end of the season to keep his place as Manchester United’s No.1.

That’s according to Mike McGrath of The Telegraph and the report suggests that pressure is building on De Gea at Old Trafford.

Dean Henderson has impressed on loan at Sheffield United, and with De Gea having an error prone season there’s a real possibility the Spaniard could lose his place at Manchester United.

McGrath writes: “It is understood the call on Henderson will be made when the final eight games of his campaign are completed, giving De Gea time to prove himself as Solskjaer’s first-choice goalkeeper.”

Henderson, 23, has two years remaining on his contract at Old Trafford but with reports Chelsea are sniffing around (via The Sun), the Red Devils may be left with no other choice but to make a call in the not too distance future.

The Telegraph reckon a decision will be made at the end of the season, which gives De Gea a little more time to improve because, let’s face it, his current form is a massive drop from the high standards he set.

Sheffield United will probably ask to take Henderson on loan again next season, but if he has the chance to join Chelsea and become their No.1, it’s only a matter of time before United are left with a pretty big dilemma.