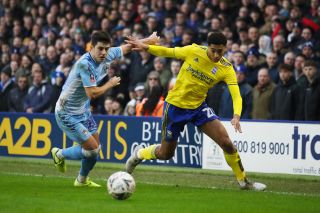 Manchester United’s interest in Birmingham City starlet Jude Bellingham has been well documented this year but so has interest from Borussia Dortmund.

The latest from Manchester Evening News claims the youngster expects to leave the Championship club this summer, though the Bundesliga club may be his preferred destination.

This will come as a blow for the Red Devils because Bellingham has been tipped as one of the brightest prospects in English football.

The report also makes note of interest from fellow Premier League club Chelsea, but that it’s now a two-horse race for the teenage midfielder’s signature.

Bellingham, 16, will be persuaded by the promise of first-team football just like Jadon Sancho was in 2017 when he left Manchester City to join Dortmund. There’s no denying that the now established England international is an inspiration for youngsters like Bellingham.

This could be a central midfielder for the future but Solskjaer has a decision to make on whether he thinks Bellingham is ready to be starter. By moving to Dortmund, you just know his valuation will rise dramatically in 12-months time…

We shouldn’t ignore Solskjaer’s attempts to build a team for the future or how his foundations are being set with young and hungry homegrown players. Maybe the manager has more work to do to convince young stars like Bellingham that Old Trafford is the place to be.

Dortmund already have a strong reputation for developing young stars and Erling Haaland is the latest to join the list.