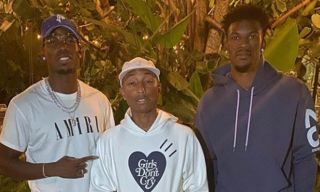 According to Footy Headlines, who are a reliable outlet when it comes to kit and boot launches, Adidas will release a special Predator 20 boot designed in cooperation between Manchester United midfielder Paul Pogba and pop star Pharell Williams.

The boots will be available in October, priced at around £250 after its release, but information is pretty scarce as of now.

But looking a previous collaborations Pharell has done with Adidas, I think we can expect something flashy, colourful and completely unique to other models on offer currently.

The Adidas boots worn by Pogba in Friday night’s draw against Tottenham had a splash of orange, and we know the French midfielder has style and swagger when it comes to his appearance.

Hopefully they have a red twist and go with next season’s kit. Anything white or black and the transfer websites will be running their headlines about how he’s dropped a ridiculous hint about his future…

Pharell is a big name in the music industry and we’re sure Pogba is looking forward to working with him on this very concept.

No pictures yet, or even design concepts, but as soon as they’re leaked we’ll have them!