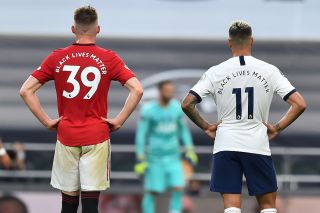 Racism in football has been a contentious issue for decades, with some saying football and politics should be kept separate. Others defending peoples right to free speech.

Kick It Out is an organisation that advocates for the rights of all players, staff and supporters. Their main ethos is to create inclusivity at grassroots level as well as promotion of respect and tolerance for players of all colours and creeds. They were founded in 1993, at a time where racism in the Premier League was at a critical level and are funded by the Premier League, the FA, the EFA and the PFA. “Kick it Out” represents equality for all players including those of Black, Asian, Jewish, Muslim and LGBT backgrounds and ethnicities.

Time and time again we hear of racial abuse of players from both fans and their fellow professionals, neither of which is acceptable or excusable. We as supporters, especially those of white decent, must understand why this conduct cannot and should not continue.

I could sit here and list out the names and incidents of racial abuse incidents in Premier League football, and that was my intention. But on reading through the sheer volume of cases of racial abuse and in some cases, assault, it makes for a depressing read. We need not look too far from United’s doorstep as players such as Patrice Evra, Danny Welbeck and Fred have been subjected to such unacceptable and unwarranted abuse.

What can we as supporters, and football as a whole, do to stop these moments of ignorance and injustice from happening?

With the Coronavirus restrictions being lifted and games restarting from June 17th, players and staff from Premier League clubs are pledging to stand up and be heard, using their huge platforms to highlight systemic racism, both in football and around the world.

“We, the players, stand together with the singular objective of eradicating racial prejudice wherever it exists, to bring about a global society of inclusion, respect, and equal opportunities for all, regardless of their colour or creed..”

The first 12 games of Project Restart saw players names on shirts replaced with “Black Lives Matter”, which may be seen as too political matter for some people. The facts are, we are all football lovers and we must be respectful and mindful of the mental health of our players and their families. Racial abuse must never be accepted in a progressive society and all people, no matter what the skin colour, have a responsibility to call it out.

We must stand together to encourage, at all levels, a culture of respect and tolerance. From grassroots to the top of the Premier League, kicking racism out of football for good is everyone’s responsibility. We are better than this. Our black players and supporters deserve better.

For more information on the “Kick it Out” campaign, please visit www.kickitout.org.

More information on the Premier League’s “No Room for Racism” campaign can be found here.