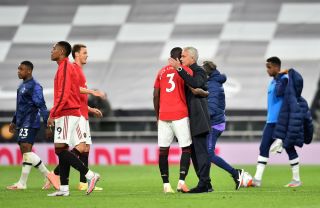 Manager Ole Gunnar Solskjaer opted to select his most familiar centre-back pairing of Victor Lindelof and captain Harry Maguire as they resumed their Premier League campaign with a 1-1 draw away to Tottenham on Friday.

Bailly was introduced in the closing stages to sure up the defence, replacing Scott McTominay who was occupying the centre-back role to give the Reds a better platform to attack from.

The Ivorian will be frustrated he didn’t earn a start alongside Maguire in the first game back, particularly given his impressive performances after regaining fitness before the enforced coronavirus break.

The defender has not conceded a goal during the games he has featured in this year, and is arguably a more proficient defender than Victor Lindelof when he can stay fit.

Maguire was more culpable than Lindelof for Steven Bergwijn’s goal for Spurs in the first-half, however. The England international was dribbled past with ease and the Swede could not get across to block the shot that should have been dealt with by David De Gea.

But Lindelof, who has previously shown weakness in physical battles, would likely be the one sacrificed against an imposing Sheffield United side if a change is made.

Do you think Bailly warrants a place ahead of Lindelof in the starting XI? Let us know by tweeting us at Stretty News.

🎯 Sheffield United rank 5th in the Premier League for most accurate long balls this season. [29.8 per game]

Eric Bailly is yet to concede a goal in 2020

He should start vs Sheffield United 💪

Maguire doesn't deserve the hate he's definitely improved our defence still feel he's better with Bailly next to him as I feel him and Victor contradict each other.#MUFC #Maguire pic.twitter.com/U7H9MZRmen

Hear me out. If that’s Eric Bailly instead of Lindelof that shot gets blocked 🤷‍♂️#mufc pic.twitter.com/u1CuCW5nVE

I like Lindelöf tbh. But when fit, Bailly is so much better than him, and should be playing. I worry that he won’t get a lot of minutes between now and the end of the season and looks to leave in the summer because of it. I’d never forgive Ole if he left for that reason.

You could make a compilation of Lindelof doing the exact same except it’d be twice as long. Get Bailly back in next to him

For me Bailly does the job. Lindelof’s fine as a rotation player. We’re just suffering for overpaying average CB’s. https://t.co/HJsRQ4MRST

READ MORE: Jude Bellingham has decided his next club with £20m transfer set to be announced