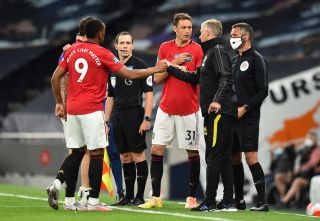 Manchester United fans largely agree that Nemanja Matic should be handed a start in Wednesday’s crucial fixture against Sheffield United at Old Trafford.

Matic had to settle for a place on the bench as the Reds restarted their Premier League campaign with a 1-1 draw against a reserved Tottenham side on Friday.

The Serbian midfielder was introduced in the final 15 minutes and brought a calming influence to proceedings, allowing United a stable platform to attack from.

Much has been spoken about midfield partnership between Bruno Fernandes and Paul Pogba, and Solskjaer almost certainly has to start the pair on Wednesday evening.

Pogba changed the game when he came on, adding new direction and an unpredictability to United’s labouring attack as they searched for a winner in the closing stages.

But to allow their two most creative midfielders the freedom to thrive, they need a player that protects the back four in defensive midfield and Matic is adept in this role.

Ole Gunnar Solskjaer may still choose to remain with either Fred or Scott McTominay in a double midfield pivot, but Matic offers a dominant and imposing option that also uses his intelligence and accuracy in possession to initiate attacks.

What Matic brings, his calming influence, he can do every week. Flashes of brilliance are NOT guaranteed. I pointed out that @gnev said it had been great for ten minutes, after Matic had been on for ten minutes. I don’t think @GNev actually realised why though. End of thread.

Re. #MUFC team selections, I see James, McTom, Fred, & Shaw as important tactical pieces in big game scenarios. When faced with a smaller team sitting in a low-block, Greenwood, Pogba (obv), Matic, & Williams are better. Problem is, nobody saw Spurs playing like minnows at home.

This is the side I’d play against Sheffield United. Lindelof should never partner Maguire again. Matic to hold so Pogba And Bruno have full license to get forward. Williams in as a more attacking threat. Romero in for the error-prone David, who is costing us dearly. #mufc pic.twitter.com/fUA7YqBrXc

Pogba, Bruno & Matic has to be the midfield three for the rest of the season #MUFC

Sheffield is a must win

Pogba has to start
Matic aswell

Bailly, Matic, Pogba and Greenwood all need to start Vs Sheffield