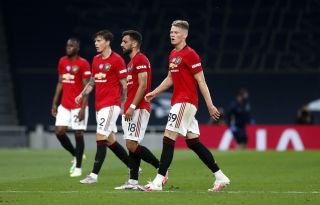 Jamie Redknapp has advised aspiring midfielders to study the game of Manchester United star Bruno Fernandes, but sent a warning to Marcus Rashford over the playmaker’s tendency to shoot.

Fernandes salvaged a much-needed point away to Jose Mourinho’s Tottenham on Friday with a cool penalty as he resumed his role as United’s fulcrum in attacking transition.

While the Portugal international frustrated with his decision making at times, he was still at the centre of all of United’s most dangerous moments going forward.

Sky Sports pundit Redknapp has lauded Fernandes for his ability to create a goalscoring opportunity in a split-second. Although the former Liverpool midfielder admits this might irritate United’s attackers at times, he believes they will be the beneficiaries in the long-run.

“My advice to any young, aspiring midfielders out there would be to study Manchester United’s Bruno Fernandes,” Redknapp told the Daily Mail.

“Look at how he strikes the ball when shooting from distance. Look at how he creates such a dip and swerve that it makes his shots more difficult to stop. It is not conventional, and it is not a fluke. It is done by design in order to bamboozle the goalkeeper.

“The instant Fernandes gets the ball, he does not delay and he does not look sideways, either. He instead looks at how he can create an immediate goalscoring opportunity or, even better, shoot himself.

“It might frustrate your forwards on game day. Maybe there will be times when Marcus Rashford says he was in a better position and should have been played in. Maybe Fernandes will be accused of greediness on the odd occasion.

“But it will be worth it for his goal return. In 2018-19, Fernandes’ last full season for Sporting Lisbon, he got 32 goals and 18 assists in 53 games. That is what Ole Gunnar Solskjaer wants from him now. United want those numbers, and they want to see a fruitful partnership form with Paul Pogba.”

Fernandes’ goal record at Sporting was remarkable and three goals and three assists in six Premier League starts is certainly an encouraging beginning to his Old Trafford career.

Ole Gunnar Solskjaer can now offer Fernandes the platform to be even more productive with the return of star man Paul Pogba.

Pogba changed the game in his 34-minute cameo against Spurs and the first glimpse of his partnership with Fernandes was extremely promising.

It’s surely a no-brainer for Solskjaer to start the pair together in midfield in Wednesday’s crucial fixture against Sheffield United at Old Trafford.