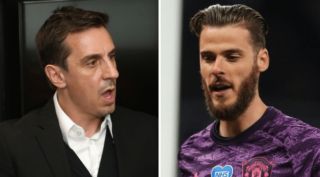 The former Manchester United full-back points to De Gea’s difficult campaign with Spain in the 2018 FIFA World Cup as the season for his drop in form ever since.

With Steven Bergwijn’s goal for Tottenham Hotspur on Friday resulting in a lot of criticism for De Gea, it was Neville’s turn to discuss the clanger on his podcast.

“He was the one player United could rely upon for the last four years but he’s not the same,” he said on the Gary Neville Podcast (Sky Sports).

“He hasn’t been the same for some time. When form drops for six months it’s a blip but when it goes on for a year you start to worry. When it goes two years it becomes more permanent.

“That is now a fait representation of what De Gea is as he’s making lots of mistakes. Ones he would never make — he was always somebody you could completely rely upon. It can only be a confidence thing. The arms, legs and body are the same — it’s got to be in the mind.

“The reception he’s got in Spain has affected him. He’s even been booed by Spanish fans when he’s wearing the Spanish shirt. In the World Cup in 2018 he really struggled and from that he’s doubted himself. Mentally he’s not quite the same.”

It’s only so long this can go on for…

Ole Gunnar Solskjaer must be looking at Dean Henderson at Sheffield United ahead of next season, but I’d still give De Gea until the end of the season to show better form.

I’m not sure dropping him now and starting Sergio Romero would do him anyone good, but what about United? The Reds are in a fight for top four and stand a few good chance if they avoid complacency.

De Gea letting in avoidable goals won’t help our cause, so Solskjaer has a couple of big decisions to make and there will be people who won’t agree with what his does.