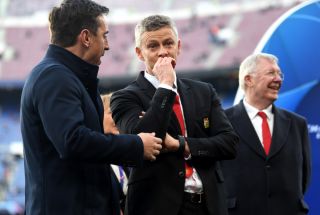 Gary Neville believes Paul Pogba is the ‘one true world-class player’ at Manchester United, and hopes the club can retain his services beyond the summer transfer window.

Pogba reminded everyone of his ability during his 34-minute cameo against Tottenham on Friday, as his impact inspired United to salvage a draw on their Premier League return against Jose Mourinho’s side.

The Frenchman was felled by Spurs centre-back Eric Dier in the box and Bruno Fernandes converted the equalising penalty with 10 minutes remaining.

He also displayed his stupendous long-range passing ability with a special ball that almost sent Marcus Rashford through on goal.

United great Neville believes the return of his star midfielder can only benefit Ole Gunnar Solskjaer, who is aiming to build a team that is ready to challenge for the league title.

“A committed Paul Pogba can be a great player for Manchester United,” Neville told Sky Sports.

“His goal and assist numbers are very good over the last couple of seasons. They are up there with the best.

“Hopefully with the economical problems and clubs can’t spend 80, 90,100 million on players, United will keep him. Pogba will then understand that’s he’s staying – all I ever want from him is commitment.

“I’ve never blamed him for United’s troubles, I do believe he’s the one true world-class player, although I would have put David de Gea in there two years ago.

“Pogba should be the one to lead from the front and if there’s speculation around his future it does create doubt in the dressing room. Now there’s a better chance of that team succeeding.”

Pogba certainly has leadership characteristics and we hope he can front United’s charge for the top-four positions in the remaining eight games of the season.

His midfield partnership with Fernandes is particularly exciting for United fans, with Solskjaer now having two of the league’s most talent creative players at his disposal.

Fernandes was a key beneficiary of Pogba’s impact from the bench, as United became more unpredictable and varied their attacking options.

The pair must start together for the first time in the crucial home game against Sheffield United on Wednesday.

Meanwhile, it’s interesting that Neville would no longer consider goalkeeper David De Gea a world-class goalkeeper. The Spaniard’s form has been worrying for over a year now and he should have prevented Steven Bergwijn’s Spurs opener on Friday.