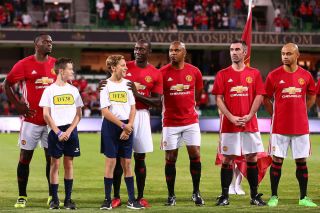 Former midfielder Quinton Fortune has outlined his ambition to manage Manchester United in the future.

Fortune has been coaching the club’s Under-23 side this season alongside Neil Wood, overseeing the progression of several academy stars into the first-team.

The ex-South Africa international spent seven years under Sir Alec Ferguson as a player at Old Trafford, and is now hoping to emulate the career path of former teammate and current boss Ole Gunnar Solskjaer.

“That’s my dream. Of course, I’m starting now with the Under-23s and I’m learning a lot and I want to learn as much as possible because management changes so much in the game today.

“Look, I [may] have to go out and learn somewhere else and become a manager. But the dream, the ultimate dream, is to come back and be the manager of Manchester United. From what I’ve been through, I’m going for the highest level.”

Fortune, 43, returned to United to train with the reserves while working towards his coaching badges in 2012. He was also the assistant manager to Cardiff City’s Under-21 side while Solskjaer was in charge in south Wales in 2014.

There are currently just four black managers occupying roles in the Football League’s 92 clubs and there have rightly been calls for more prospective black coaches to be given more opportunities in management.

But Fortune is determined not to let the ‘barrier’ of opportunity hold him back and wants to earn his role on merit.

“I want to be given the job because of my ability,” he added.

“I want to always be judged because of my character and what I can bring to the team, not because of the colour of my skin.

“When you look at the game, you see a lot of black players but why are there not many black managers? I don’t know what the reason is. I think if I go too deep into that it will block my way of thinking.

“I like to think I am going to work as hard as I can, get all my qualifications, prepare myself and not let that barrier stop me. And if there is a system put in place, great, but regardless of that I’m going to go and work anyway.”

Fortune helped guide United’s Under-23 side to second place in the Premier League 2 group 2 standings before the curtailment of the season due to the coronavirus pandemic.

We hope he can continue his good work in developing United’s youngsters of tomorrow and will follow his coaching career with avid interest in the coming years.