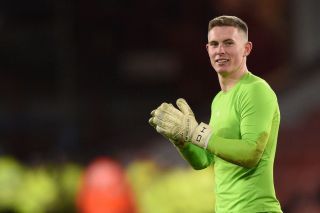 Manchester United are reportedly keen to reward goalkeeper Dean Henderson an improved contract at Old Trafford in a bid to secure his long-term future.

It’s at Bramall Lane where Henderson has really made his name, establishing himself as one of the Premier League’s top performing goalkeepers and pushing for a starting spot for England.

United boss Ole Gunnar Solskjaer has already stated that he wants Henderson to be his future number one at the club.

But according to the Manchester Evening News, Henderson is only ready to commit to a new deal at United if he is guaranteed the number one spot.

It is reported that the 23-year-old has been ‘inundated’ with offers this summer and is taking time to make his decision.

David De Gea is under scrutiny after making a basic error allowing Steven Bergwijn to open the scoring in Friday’s draw against Tottenham.

But the 28-year-old Spaniard only just recently signed a new contract at the club and is not expected to depart any time soon.

Therefore, it appears Solskjaer will be left with the huge dilemma of whether to promote rising star Henderson above De Gea whose form has deteriorated considerably in the last two years.

Surely United can’t afford to let go of such a talented goalkeeper that has the potential to be number one for a decade at Old Trafford.

But De Gea’s efforts during his nine-year United career cannot be ignored either and he will feel he deserves time to atone for his recent mistakes.

Henderson will not play any part as United take on the Blades at Old Trafford on Wednesday because of the terms of his loan deal.