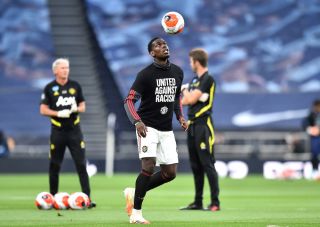 Prior to Friday evening’s match between Tottenham and Manchester United in London, reporters’ most pressing question for Spurs manager Jose Mourinho was why he would leave twin Belgian defenders Toby Alderweireld and Jan Vertonghen on the bench and start defensive midfielder Eric Dier at centre-half? Mourinho referenced United’s searing pace in attack and stated his belief that, among his options, Dier was best suited to “cope”.

For eighty minutes, he wasn’t wrong. Tottenham contained Marcus Rashford, Anthony Martial and Daniel James, or at least the nimble trio didn’t take any of the chances they created. Meanwhile, Jose’s own speed merchant, Steven Bergwijn, pushed Luke Shaw, Harry Maguire and David de Gea to the top of Roy Keane’s hit list by scoring the game’s only goal to that point.

Then Dier found himself alone at the edge of the box to the left of Hugo Lloris’ net, face to face with Paul Pogba. The Frenchman took him to the touchline where, like Boris Johnson playing rugby with a Japanese schoolboy, he shouldered past the English international and pressed on towards the goal. However, Dier is rather large and quick for a ten-year-old. He kept his feet, gave chase, clutched at Pogba’s left arm, slowing him enough to pull almost level and delivered a mild hip-check that sent United’s No.6 to the ground well inside the box. Referee Jon Moss pointed to the spot. United darling Bruno Fernandez dispatched. The match was all square.

Afterwards, United supporters didn’t complain about Fernandez’s circuitous, stop-and-start penalty technique, almost certainly because he isn’t Pogba. They’re not at all concerned the new man’s goal total will be artificially inflated by spot kicks. They like the Portuguese. Even the embittered Jose Mourinho offered a sly remark and a playful smirk for his countryman when he ventured near the Spurs technical area late in proceedings.

Before the contest, however, many Red social media warriors claimed Pogba didn’t deserve to start the match. United had been on a tremendous unbeaten run prior to play’s suspension and while he underwent ankle surgery. The XI who soldiered on without him deserved the opportunity to prove they could continue their run without the club’s best player.

And make no mistake, Pogba, not Fernandes, Rashford or De Gea, is far and away United’s best player.

Still, loyalty to those who stood in for him stems solely from the fact many fans despise the midfielder. There are few footballers who surpass Pogba’s talent but you can rest assured neither Barcelona nor Juventus’ fan bases would expect their managers to leave a fully fit Lionel Messi or Cristiano Ronaldo on the bench following a long absence because the club were winning without their talisman. They’d be back in the starting line-up, their contributions missed and welcome. In that other kind of football, the New England Patriots didn’t regularly appear in Super Bowls because Bill Belichick handed a healthy Tom Brady the clipboard and stuck with his backup when the greatest quarterback of all time was once more available. Football of any elite variety is about winning and you win by fielding your best players.

United boss Ole Gunnar Solskjaer wasn’t pandering to the Pogba haters by not starting the World Cup-winner at the new Tottenham stadium. The Norwegian spends too much camera time gushing over the 26-year-old’s talent and character while expressing his desire to keep him at the club. No, Pogba was simply the least match-fit squad member, not playing at all in 2020, let alone during the coronavirus stoppage. In 2019, he came back to play through injury for two December matches, making an impact much as he instantly did on the hour-mark in this one. But then he was shelved again to undergo an operation. Once burned, Solskjaer was twice shy about pushing his prodigious talent back into the fire too soon.

The problem with Pogba is his motivation. That isn’t to say it’s lacking. Rather, it comes from the wrong place. He plays out of sheer enthusiasm for the game, laughing, smiling, dancing with the ball at his feet, strutting proudly without it.

United fans do not understand optimism and unbridled joy in their talismen. Blooded on the antagonism of Cantona and Keane, they prefer players with the bit between their teeth, whether it’s a troubled George Best fighting personal demons, the prodigious Ronaldo acting from petulance, a young Wayne Rooney driven by a fiery temper or the aging Zlatan Ibrahimovic by defiance.

Unlike those superstars, Pogba is comfortable in his skin. He sees nothing to prove, enraging supporters who so desperately want him to be conflicted and subservient that they’ve spent his entire tenure creating strife. If they do not put aside their prejudices to enjoy their supreme talent, he will leave. United will pay the price and haters will subsequently denigrate him for excelling at Real Madrid or Paris Saint-Germain, as always pointing the finger at anyone other than themselves.

Of course, the uncomfortable colour of Pogba’s skin plays a part in their perception of him as well. As the entire league not only salutes NHS workers before each game but also takes a knee to acknowledge #BlackLivesMatter, that prejudice cannot be ignored. There is the rare idiot who openly hates his blackness. For most, it’s subconscious. Even fans of colour decry Pogba’s free spirit and reserve the right to lord it over him like so many Samuel L Jackson characters from Django in Chains. Like it or not, though, you can be sure the number for whom race truly isn’t a factor is far, far fewer than those who loudly deny the accusation.

Any black man who doesn’t submit, who doesn’t pantomime the character people demand from him, who cannot be controlled, will not be admired. Instead, fault will be found. United supporters criticized Pogba before his return from Turin, antagonized him from the moment he pulled on the shirt and hypocritically labelled him disloyal when he hinted at a happiness to go where he’d be more welcome.

Paul Labile Pogba is a footballing poet laureate, a truly generational talent. The club would love to exploit his commercial appeal for years to come. Ole Gunnar Solskjaer and his coaching staff want him in the starting lineup for as long as possible. Teammates desire his presence, as well, to make them look better. Even Bruno Fernandez knows he can do everything the Frenchman can in the final third but no one can unleash impetuous sixty-yard half-volleys that meet Marcus Rashford perfectly while in full stride. No one immediately inspires the team to attack as Pogba does. But too many fans prefer a servant to an artist. Honestly, what kind of numpty values Downton Abbey over the Sistine Chapel?