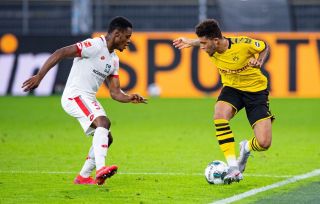 It’s June and, while transfers rumours take a back seat to the recently resumed Premier League, Jadon Sancho looms very much in the forefront of Manchester United supporters’ thoughts. That’s been the case since buzz the England debutante was unsettled at Borussia Dortmund began to hum before the holidays. Even though his contract runs through June of 2022, rumours suggest the youngster is prepared to force a move to a Premier League club, with United, Chelsea and Liverpool all mooted.

Two years younger but valued by Transfermarkt at £105.30 million, more than five times that of current Red Devils right-winger, Daniel James, fans are drooling at the prospect of Sancho on one flank and Marcus Rashford on the other. Why not, with the pace, creative touch and finishing he brings to the table?

Sancho currently logs 20 goals and the same in assists through 43 matches for BVB this term. A direct goal involvement every 81 minutes should turn heads. Given his production is an improvement on 13G/19A/43App in 2018/19, when he played 263 fewer minutes, it can’t be considered an anomaly either. He should only improve.

The question is whether he’ll mature. Sancho reacted poorly to discipline for missing team meetings and other undisclosed antics. That suggests a lack of commitment to the team. Some are willing to forgive his ill-discipline, suggesting the player is homesick in a foreign culture. Maybe, but then he also forced a move out of Manchester City as a teenager, afraid he wouldn’t see playing time under Pep Guardiola while the Sky Blues outspent everyone in the Premier League. Even though all the evidence supports that decision, including Phil Foden’s limited minutes in the first team, Sancho clearly placed his own career above organisational goals.

Perhaps that attitude will change in the coming years after he moves to a top Premier League side. Or maybe it won’t. The primadonna label stuck to Romelu Lukaku even after he left Everton for United, so much so that Ole Gunnar Solskjaer sanctioned the Belgian’s sale to Inter Milan without a proven replacement to step into his shoes. According to ESPN FC’s Rob Dawson, Solskjaer also wants his squad to be “boring” off the pitch and that Marcos Rojo’s loan to Estudiantes came in part because he wouldn’t adhere to club rules.

Will the Norwegian feel comfortable sanctioning a nine-figure transfer to land an immature, independent-minded superstar, regardless of his talent and especially when the coronavirus appears likely to leave buying clubs skittish about high-end purchases and sellers desperate to hold onto their best players? Or will he recommend the club take a more conservative route, signing an affordable, proven star to provide experience while Daniel James continues to develop? Or perhaps another journeyman centre-forward to back Anthony Martial in the middle while Mason Greenwood steps into the right-wing role?

In part, such a decision may be influenced by whether the club competes in next season’s Champions League. Without that ticket, Sancho is less likely to sign and, frankly, won’t be needed in the short term. With it, the club will be more tempted to gamble on his attitude.

In addition, fielding one of Pep’s brightest academy talents will be a thumb in the noisy neighbour’s eye, especially if the Court of Arbitration for Sport upholds their UCL ban. By all accounts, United signed both Fred and Alexis Sanchez to stymie City’s ambition. Third time pays for all, they say.

Having said it, though, Sancho’s me-first attitude off the pitch makes his recruitment a significant roll of the dice.

READ MORE: Jadon Sancho was dropped because his head is already with United, claims German journalist