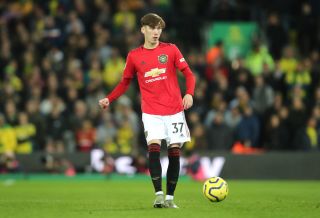 Manchester United youngster James Garner has responded to the praise he received from fellow midfielder Fred.

Garner, 19 has been limited to just three first-team starts under Ole Gunnar Solskjaer this season, all of which coming in the Europa League.

The Birkenhead-born academy graduate has shone for the u23 team this season, proving he has outgrown age-group football with a series of notable performances.

While he may not have enjoyed as much game-time in the first-team he would have liked this season, Garner has certainly made a lasting impression on some of his teammates.

Fred, who has himself enjoyed his breakthrough United season this term, believes Garner is the most impressive academy talent at the club.

“What impresses me most is James Garner,” he told Travela in April when asked about breakthrough stars Mason Greenwood and Brandon Williams.

“Not because he is in the same position as me, but he is a player who has an impressive vision of the game, has a huge future for United.

“In addition to the impressive game vision, he always plays with his head up, has an impressive shot, an incredible pass. He is a player that I admire a lot.”

Garner has been involved in United’s training squad after the enforced break and is driven to prove to Solskjaer that Fred is accurate in his verdict.

“It was very nice to hear it,” Garner told United’s official website.

“When you see that kind of stuff, it makes you smile but it also makes you want to get better to show him, and not just him but everyone, that they can have the same opinion.

Garner will struggle for any game-time in the remaining eight league fixtures with United now stacked with experienced midfield options.

As reported by Manchester Evening News, he is expected to go out on loan next season, and we can’t wait to see him thrive playing regular first-team football as he looks to make his mark.